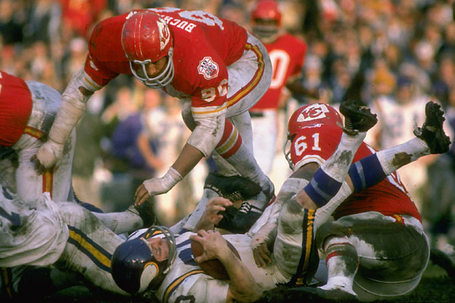 We asked and we received. The request was your top 10 Chiefs draft choices of all time, and you responded...

...Remarkably, five players were named on almost all the lists. To break ties, we tallied up the number of times the player was named No. 1. Even then, we had to break a tie between three players going down to how many times they were voted No. 2 on the ballots.

In the end, it’s really a remarkable collection of football talent at the top of the list, lead by three Hall of Fame linebackers: Bobby Bell, Derrick Thomas and Willie Lanier.

Here’s how it all broke down:

Coming up for the next 21 days will be a series of profiles of draftable players. These will not be the Sam Bradford, Eric Berry, Gerald McCoy types. There are plenty of stories about the players at the top of this draft available from literally hundreds of outlets.

Our profiles will concentrate on the players that will likely fall between No. 33 and No. 100. These are guys that could be the Chiefs second, third and even fourth round selections.  Our list of names was provided to scouts from three NFL teams and with a few exceptions, they agreed that these players fall into that range of the draft spectrum.

THE RIGHT 53? – Ghee’s career has not trended upwards; he seems to have regressed since his sophomore year, which was his big season so that marks him as an underachiever. A roller coaster player is something the Chiefs do not like, no matter the upside. However, he comes from a military background (so does Romeo Crennel) and he’s intelligent.

What he said – "I have great ability. I am a good person on and off-the-field. I have the ability to start in the NFL as a rookie. I can contribute to an NFL team right away."

THE RIGHT 53? – High intensity defender who was a leader on his team on and off the field … earned a degree in criminal justice in 3.5 years and is the first of his family to graduate from college … did not miss a game because of injury … has extensive special teams experience, participating in the No. 1 units on punt, punt return and field goal block.

What he said – "I’m that guy you can count on. I’m that guy you don’t have to take off the field on fourth down because I’ll be on the punt team. You can keep me on the field for kickoff and kickoff return. I’m always available."

Reilly canceled his April 8 appearance to cover Tiger Woods at the 2010 Masters Tournament.

"We looked for a comparable speaker to fit the same niche, which is sports," Distinguished Speaker Series Chairman Mike Perone said.

The 1969 Kansas City Chiefs led the AFL in every single category I tracked, won Super Bowl IV, and had three Hall of Famers starting on defense, plus at least one more who should also be in. Great defenses both, probably top-20, but they missed the cut here.

Here are the 10 best defenses in league history.

The NFL’s Best Defenses Ever from Sports Central

Scott Pioli, GM of the Kansas City Chiefs, is the only other executive to ever scout the AAFA. He also looked into signing Cornbread for the Chiefs.

"I didn't realize that anyone else was looking into Cornbread," Pioli said. "We were trying to sign him for awhile, but he wouldn't return any of our calls. We offered him $47 million, but he wouldn't budge. I guess we'll just take Cibatta from Brisbane." Making a reference to the "elite" linebacker.

GlennDorsey72 Arm burning but I likes

getnickwright @arrowheadpride @arrowheadaddict Brandon Carr is looking for more followers and you have his old twitter listed... help him out @BCarr39

kentbabb There might not be a player in the NFL today with less of a clue than Larry Johnson. His troubles are always someone else's fault.

kentbabb People ask me sometimes what the Chiefs players are like. Most are terrific people. LJ was the exception. Not misunderstood. Just clueless.

mitchholthus As promised April 1 is here...and let the tweeting resume. It was a great college basketball year. Cole Aldrich should have been Big 12 POW.

mitchholthus Very positive Chiefs off-season so far...This team is 7 planets ahead of where it was a year ago at this time...from staff adds to TJones

Adam_Schefter Exactly three weeks from this time tonight, we'll be about halfway through the first round of the draft at Radio City Music Hall.