With The 52nd Pick In The Arrowhead Pride Mock Draft, The Pittsburgh Steelers Select...

Share All sharing options for: With The 52nd Pick In The Arrowhead Pride Mock Draft, The Pittsburgh Steelers Select...

We're trying to speed things up to finish in time and I haven't heard from the person who chose the Steelers so I'm making the pick using SB Nation's mock draft. godlovetheredman with the pick...

Well.....damn.  I felt fairly confident that things would work out in my favor in the second round and as far as available players, it played out exactly like I thought it would.  Unfortunately, the Steelers and Milledgeville, GA have made it a point to completely ruin any mock draft done up until the Santonio Holmes trade and the immense cop out by DA Fred Bright.

I came into the second round with a plan to make the Steelers a better team and I still plan on doing that, but since I have your attention, I'm going to go on a little rant for a minute.  If you are not a fan of public opinion, read the next paragraph with your eyes closed.

I hate the Steelers.  Being in Arrowhead to watch the Chiefs beat them last season was like Christmas, New Year's Eve, Cinco de Mayo and the Chinese New Year old rolled into one burrito like egg roll.  But I take this mock draft seriously just like I take offense to rapists.  Now I don't what happened in that famous one stall bathroom the night underage sorority girl(I'm not sure if that's her real name or not) accused Big Ben of touching her naughty parts, but I do know this: The male DNA that WAS found with the Rape Kit, wasn't found in her armpit which means there was foul play.  It's a rape kit.  Rape usually involves some form of sexual contact which means they aren't swabbing her entire body(put 2 and 2 together AP).  Ben deserves to be in jail and I think it's completely ridiculous that they aren't going to charge his ass.

That being said, there is a second round pick to be made.  Now some Steeler faithful really wanted an offensive lineman in the first round.  My answer to that, don't let Matt Cassel average 8.27 yards per pass against you and I won't (mockingly)draft the cornerback you so desperately need.  So throwing out that the Rams will probably make some retarded deal to get Roethlisberger and Santonio Holmes was shipped to the one team that doesn't need another great off season signing, let's take a hard look at the offensive line.

Whatever game the Steelers are playing has me confused.  They want to upgrade the offensive line, but four of five starters just got new contracts before the 2009 season.  Willie Colon missed his chance to sign with another team and must now sign his tender or go fishing.  All five starters are returning and it looks like a good squad to me.  Course I'm a Chiefs fan and I feel I haven't seen a good line since the untimely departure of Willie Roaf(I still think he was out to get us for some reason).

Me personally, after recent events and the fact there are four quality quarterbacks on the board, I'm not really worried about the O-Line.  But I'm not an analyst or a Steelers fan so here we go.

The interior line is where the Steelers need to bulk up.  There are plenty who believe Kraig Urbik, 6'5" 325 lbs., is poised to replace Chris Kemoeatu at left guard.  Urbik, 24 years old, was the 3rd round pick for the Steelers in the 2009 draft. He's a young guy with a lot of upside.(Still failing to see why line is a huge need.  Hoping a Steeler fan can clear this up for me)

Willie Colon.  The best in the bunch. A 6'3", 315 pound, 27 year old starting right tackle who didn't miss a game last season.(Do people really view this as their largest need in the draft?)

So after seeing their starting line I'm ready to make my pick.

With the 50th selection of the 2010 NFL Draft, the  Pittsburgh Steelers select.... 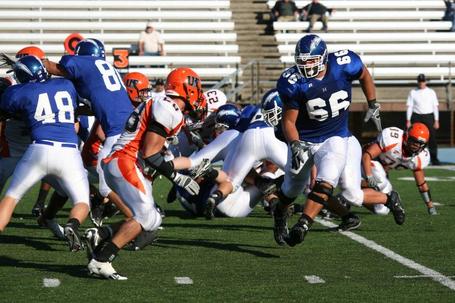 For no reason other than his immense upside, the fact that all of the rumblings surrounding the Steelers draft interests mention lineman, and the fact he is a damned good project to have.  His size and athletic ability make him one of the most intriguing lineman out there.  With a damn good starting five in front this pick makes no sense to me, but if you want a lineman Steeler fan, I got you a steal.