With The 51st Pick In The Arrowhead Pride Mock Draft, The Houston Texans Select...

Share All sharing options for: With The 51st Pick In The Arrowhead Pride Mock Draft, The Houston Texans Select...

Honestly, I was crushed when justinmayhugh pulled the Earl Thomas rug out from under my feet in round one.  I knew the Texans had major deficiencies in the secondary and a lot of people had him falling to Houston.  If I were a real GM and trades were allowed, I'd probably be kicking myself if I hadn't found a way to trade up.

Don't get me wrong, I think Ryan Mathews is a fine pick for Houston.  But the Texans, who were 18th in pass defense before losing their best CB, are now in desperate need of starters in the secondary.  There's little doubt in my mind that Houston will pick a DB before the 3rd round.

So the Houston Texans select... 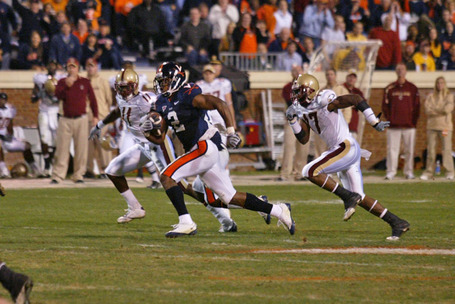 This was a relatively easy pick.  Houston needs a defensive back and Chris Cook is an available cover 2 CB that could, I think, fit into their scheme fairly well.  He's a bit of a risk because of academic and health issues but he's never backed down from an opportunity to showcase his skills this off-season and I think coaches and GMs really key in on that trait.

Here's a blurb on him from NFLDraftScout.com:

Chris Cook's NFL qualifications are as plain as day. At 6-foot-2, he's tall for a cornerback, and with very good speed and instincts to match, he's likely to hear his name called early in this spring's NFL draft. The fact that Cook not only attended the NFL's invitation-only scouting combine for top talent last month in Indianapolis, but was also among the former Virginia players who turned out Thursday to be put through paces by NFL scouts at the school's timing day only added to his allure. "Why not?" is what many teams will think, said Steve Verderosa, executive scout for the New York Giants. "Work out as many times as you can. You have something to hide?" Cook said that he knew he could improve on the times he had for some drills in Indianapolis and was determined to do so, which Verderosa said also is a good sign. And for Cook, who said he's been told he'll be drafted somewhere between the late first round and the third or fourth, improving those times could prove very lucrative. "Now it's time for the people who make the decisions to make the decision," he said.