With The 50th Pick In The Arrowhead Pride Mock Draft, The Kansas City Chiefs Select...

Share All sharing options for: With The 50th Pick In The Arrowhead Pride Mock Draft, The Kansas City Chiefs Select...

With safety, and wide receiver taken care of, the Chiefs will focus on improving the front seven. The Chiefs could use a linebacker that plays either inside or outside.

However, they could also use an anchor for their 3-4 defense at the nose tackle position. The nose tackle position is a bigger and more important need, but there's been rumors flying around that the Chiefs are interested in maybe moving Glenn Dorsey. With players like Cam Thomas, Torell Troup, Ricky Sapp, Dekota Watson, Jason Wilfords, Jamar Chaney, Brandon Spikes, and Sean Lee all still available. Who do the Chiefs draft? 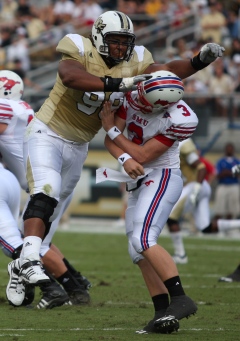 With the 50th pick in the 2010 NFL Draft the Kansas City Chiefs select Torell Troup from Central Florida.

Since coaching him in the East-West Shrine Game, it has become clear that Torell Troup is Romeo Crennel's Juliet. Now it is more than likely that Troup could be had in the third round, but since when has Scott Pioli cared about reaching on players? The Don has his chance to join Romeo with his Juliet, and will with good reason.

"Troup is a thickly built defensive tackle with definite flesh around the midsection, Troup displays an above-average first step off the ball for his size and impressive flexibility out of his stance. He does a nice job keeping his pad level down when making his way up the field and generates impressive power from his lower half. His combination of power and initial burst allows him to consistently cross the frame of opposing defenders and surge into the backfield. He's powerful on contact and does a good job keeping his base down, extending his arms and fighting off blocks on contact. He uses his hands well to keep himself clean and possesses the range to make plays away from his frame and beat slide-down blocks off the snap. Troup plays with good leverage and consistently is able to get his hands under opposing linemen in the run game and win at the point of attack. He isn't sudden on contact but displays a solid arm-over move that he goes to in order to slip blocks.

But he lacks the type of body control to cleanly slip blocks inside. He's more of a straight-line athlete but certainly has the power to overwhelm as a bull-rusher and push the pocket. Troup possesses improved instincts from last season, but he still has a tendency to miss the snap count at times. Still, he does a much better job finding the ball and reading the screen game. He has a tendency to wear down and will get sloppy with his stance and overall pad level. However, he showcases a lot of improvement from last year and looks like a guy who has the base strength to anchor inside and could eventually mature into a starting nose tackle for a NFL defense."

Basically, this guy was born to be a nose tackle, playing the position in college football, and dominating the combine with an amazing 34 bench reps, tied for fourth best among all defensive players.