Share All sharing options for: Add Chiefs GM Scott Pioli To Those Who Think More Draft Day Trades Are Coming 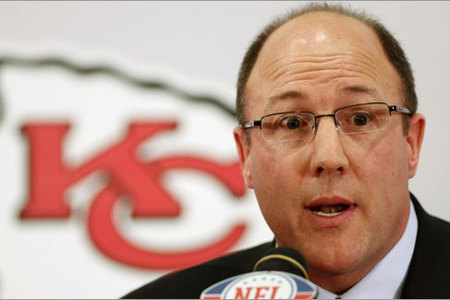 As we enter a new era with the NFL Draft now in primetime, a lot of talk has been centered on the three-day schedule separating the first round from the second and third. The feeling seems to be that the 20 hours between rounds one and two will create more trade buzz.

Over the course of the last few weeks, quite a few teams have suggested the new schedule will be conducive to more trades.

We can add Chiefs GM Scott Pioli to those who feel the trade talk will heat up on Friday leading up to round two.

"Talking to a lot of other people around the league," Pioli said on Friday, "they like the idea because I think it’s going to be a lot more conducive to a lot more movement in the second round, just like the top of the fourth round was always a busy part of the draft in terms of trades or potential trades."

Pioli said the fourth round in the old schedule didn't necessarily always have a lot of movement but there was "a lot of of business attempting to be done."

It'll be interesting to see how all this shakes out. In the second round, there will definitely be some guys that slipped out of the first round that certain teams feel like mortgaging part of their future for. In the fourth round of the old schedule, the talent level isn't as big which means you're probably not willing to risk as much.

The consensus seems to be that there will be more trades. However, I wouldn't get that excited. Entering free agency, the thought was that more teams would be involved in restricted free agency signing players to offer sheets but after a month and a half of free agency, just one player signed an offer sheet (and he was tendered at the no-compensation level).