With The 48th Pick In The Arrowhead Pride Mock Draft, The Carolina Panthers Select...

Share All sharing options for: With The 48th Pick In The Arrowhead Pride Mock Draft, The Carolina Panthers Select...

Charlotte, North Carolina. The home of Bank of America and Wachovia, as well as other financial institutions, has seen much turmoil with the economic crash beginning last year.  Charlotte has had many businesses close and many members of the community find themselves jobless in recent months. It's a city with much need for something to cheer about indeed.

The surging Charlotte Bobcats organization has solidified its very first playoff berth (congrats to them for a job well done), but the pulse of the city is located at Bank of America stadium.  Although the Panthers are a young organization, they have captured the hearts of everyone in North and South Carolina with the inspired play that took them from 1-15 in 2001 to a near Super Bowl victory 2 years later.

Enter this NFL offseason. The Carolina Panthers organization is amidst a shakedown much like our beloved Chiefs began last season. Jake Delhomme, the former starting quarterback, was ousted after an Epic Fail of a season beginning with a 5 turnover performance I witnessed from the front row. Julius Peppers, the defensive face of the franchise, forced his way to "greener pastures" and never looked back. Several other players are now gone after cuts this offseason which point to the desire of the front office to start a youth movement.

The Panthers, like the Chiefs have many holes to fill, and have the undaunting task of beginning this rebuild without their first round pick this year (traded in the last draft to take Everette Brown DE - FSU). 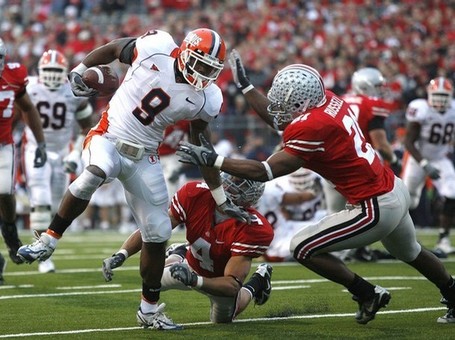 Although Benn has a relatively small body of work in his college career, he has great size (6'2" 220) and speed (Combine 40: 4.48, Pro Day 40: 4.36). His very physical style of play draws comparisons to Anquan Boldin and Andre Johnson.

The Panthers appear to be content to give their new quarterback, Matt Moore, the nod this year and they would welcome another weapon for the young QB to count on opposite Steve Smith. A balanced passing attack to go along with the best RB tandem in the league last year (J. Stewart and D. Williams) would make the Panthers an offensive force to be reckoned with all year long............