With The 46th Pick In The Arrowhead Pride Mock Draft, The New York Giants Select...

Share All sharing options for: With The 46th Pick In The Arrowhead Pride Mock Draft, The New York Giants Select...

In the first round, I had a very easy pick with Rolando McClain to the Giants at #15. Although I do not think that will really happen come April 22nd, I had to make the pick. Why? Because the Giants need linebackers. The Giants need linebackers like we need Eric Berry. (Sorry, had to do it.) The New York Giants know that their defense needs to come to play this year and with new DC Perry Fewell calling the shots, he can not follow in the footsteps of the ex-DC of the Giants, Bill Sheridan.

Therefore, with the 46th pick in this years draft, the Giants select... 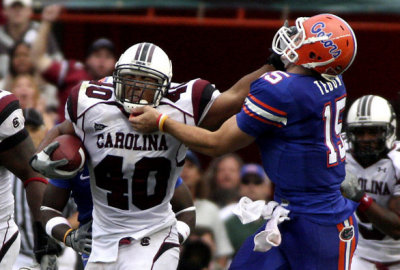 Bang. Just like that. Now, I am not saying this will happen, but if the Giants did indeed get Rolando McClain and then got their hands on a guy like Eric Norwood...wow, what a future for this defense with two guys like this at the LB position. The Giants would salivate at the thought of these two guys at the linebacker position along with drafting Virginia's Clint Sintim last year. In Perry Fewell's Tampa 2-type defense, Norwood and Sintim would occupy the two OLB spots while McClain would occupy the ILB position of this leader-thirsty defense.

While at South Carolina, Norwood was the teams defensive captain and was a fierce presence on defense. He turned in 40-times at the combine between high 4.6 and low 4.7, which are pretty good for an OLB in a Tampa 2 Scheme. I think if the Giants are serious about contending in the NFC East this year, with the loss of Antonio Pierce and the way their defense got shelled last year, it is imperative they draft heavy on linebackers. With that being said, what better way to re-vamp your linebacker core with two star-studded talents like Rolando McClain and Eric Norwood? Not to mention both players were the defensive captains and leaders of their defense in college as well.

Other choices I was close to making here included Florida DE Carlos Dunlap who's 6'6" 260 pound frame is hard to ingore, PSU ILB Sean Lee who has 100 tackle seasons written all over him, and Clemson DE/OLB Ricky Sapp, who showed miles of heart playing his senior season on a bum leg. I liked Sapp a lot for this pick, but with the Giants having a guy like Mathias Kiwanuka who has the same size and frame as Sapp, I figured Norwood would be the better fit.

And with that being my last pick, just wanted to thank Joel and Chris for letting me take part of the AP Mock Draft this year and I look forward to contributing my picks to many more. Big day for all of us on the 22nd, let's make the final week up to the draft as exciting as can be. Go Chiefs!