With The 45th Pick In The Arrowhead Pride Mock Draft, The Denver Broncos Select...

Share All sharing options for: With The 45th Pick In The Arrowhead Pride Mock Draft, The Denver Broncos Select...

How dare you steal one of my picks Chris Thorman??  Joel, were you involved in this decision?  You Thorman brothers must be stopped, the success of this site must have gone to your heads.

Who do you think you are??  Do you have any idea how important Mock Drafts are?  What gives you the right to alter the NFL Draft order?  Have you cleared this with Goodell?  You have the man on speed dial now?

Some day I may get over this, but for now, I'll just have to do my best to focus on making my picks...yeah I said it, my picks.  Plural.  You're getting two.

Maybe there can be only one official pick, and that's fine, I can handle that, but for those scoring at home...which I'm guessing is no one, personally I'm counting this pick as #43.

Predictions...when ‘mocking' for the Broncos, I've had to make a lot of predictions, I had to predict, or assume, that they'd deal BM (I like calling him BM, hopefully for obvious reasons) when making my 1st round pick.  I went with Dez.  Of course, neither me or Miss Cleo could predict, even with Dez, that a couple days after making that mock pick, he'd forget his cleats for his pro-day workout...oh Dez...

Anyway, lets get to the man that is sticking out like a Raider coach with common sense.  A player, that if he really falls to NE at #44, the Chiefs would have to consider trying to move up to get him.

And that player is Kareem Jackson, CB, Alabama. 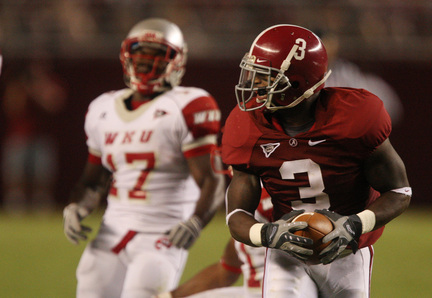 It's hard for me to take this write up all that seriously (if it's not evident by now) because I think there is no possibility that Jackson is there at #43 or #45.  I don't think there's much chance at all he gets out of the first round.  I could be wrong, but what I see in Jackson is a CB with basically no flaws, that has been well coached, and will be an NFL starter immeadiately.  Superstar?  Maybe not, but a very solid starter.  Dare I say it...Flowersesque.

I'll even make the prediction that this pick win's the ‘non-reach award' or whatever we are renaming the ‘Darius Hayward-Bey Award' for pick in the AP mock draft that was drafted the furthest ahead in the actual draft.  My real prediction is that he'll go #24 to PHI, but he could easily crack the top 20.  Either way, at #45 it's a steal.  Thank you for that fellow AP mockers.

Jackson also would fill a big need for the Broncos.  So I hope desperately they don't get their hands on him.  Champ Bailey (possibly my favorite player ever when he was coming out of GA) will be 32 when the season starts.  He's got at least a couple more productive years in him (if he wants to play) but he's also in the last year of a contract that pays him $13 mil this year.

The Broncos also haven't been spending money lately, and there is a good chance after this season, they may not pony up for Champ.

Even if they do, they don't have a great CB opposite Bailey, and certainly no one on the roster currently that they could project to be a #1 NFL CB.  If they could get their hands on Jackson, I don't think they would hesitate to do so.  I think McDaniels would be Jersey Shore fist pumping his way to the podium to hand the pick in himself.

Ok, I talked about predictions earlier, and I'll make another...I think the Broncos will deal Tony Scheffler between now and day 2 or 3 of the draft.  No, not for a 3rd like they think over at MHR (god love them) but they'll get him dealt.  A 4th probably would do it, but it wouldn't shock me at all if they take a 5th, and maybe something else.   When that happens, I'm going to mock/predict/whatever, that they take Rob Gronkowski with their 2b pick.  McDaniels obviously comes from NE, and they certainly weren't afraid to take TE's early in NE.

No, I'm not doing a full write up on this one, since I don't know if the draft nazi Thorman Bros' are going to even acknowledge this pick.  But he's another great value, so even if this has to be unofficial, I can at least throw it out there so it's saved forever on the internets, or at least until 2012 when the great Mayanpredictors (see how I tied it all together) have told us we're all finished.

I want to finish with a couple comments on the Broncos...man I hate them.  I also am starting to fear them again.  The Cutler deal last season was brilliant.  In the BM deal this year they got more than pretty much anyone thought they would.  Heck, you could certainly argue (and I would) that 2 2nd's, with the salaries factored in is better than...even a mid 1st round pick.

The one thing we have to hope is that McDaniels sucks at evaluating talent.  I think this is a real possibility, but we have to hope that it happens, because he and the Broncos have a lot of ammo, and if they unleash it with a three-some of Dez Bryant, Kareem Jackson and Rob Gronkowski...that's scary, in more ways than one.  I know there are a lot of Dez haters out there, and somewhat rightfully so, but I'd just assume he stays out of Denver, because I think, talent wise, he's one of the top 5 players in the draft.

Thorman Bros...you take any more of my picks...watch your back in B-side.