With The 42nd Pick In The Arrowhead Pride Mock Draft, The Tampa Bay Bucs Select...

Share All sharing options for: With The 42nd Pick In The Arrowhead Pride Mock Draft, The Tampa Bay Bucs Select...

Quarterback Josh Freeman performed admirably in 2009. He hit a few roadblocks during the season, but for the most part, he looked the part of a franchise Quarterback. In his first start, he threw 3 touchdowns in a victory over the playoff bound Green Bay Packers. He also went on to be one of the few Quarterbacks to beat the Super Bowl Champion, New Orleans Saints. I'm sure the Buc nation is excited about Freeman's future but he will not be able to do it alone.

2008 stand out Wide Receiver, Antonio Bryant is now a member of the Cincinnati Bengals. His departure has left a huge hole at the #1 receiver position. During the offseason, the Buccaneers acquired receiver Reggie Brown. Though he is not a true #1 receiver, he possesses good size and hands, which makes it a good pickup. Brown has a history of injuries but, if he can stay healthy, he should lock down the #2 receiver position and should prove to be a viable option for Freeman. The Bucs also have other talented players on offense. Tight End Kellen Winslow Jr. is a pro bowl player, and the three-headed backfield of Cadillac Williams, Ernest Graham, and Derrick Ward is very effective. With my first two selections, I paid heavy attention to the defense, and rightfully so. Now it's time to put a little consideration towards the offense. 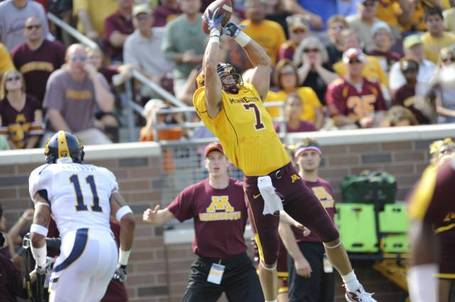 During the 2009 NCAA football season, I paid close attention to Eric Decker. Prior to his injury, I had him as the second best receiver in the nation, behind Dez Bryant. He was an unstoppable force. Week in and week out, defenses focused on Decker. They doubled him, rolled coverage over to his side, and he consistently beat them. Decker is spot on with his route running and can run every route in the route tree. Its what allows him to get open with ease. He also has excellent hands. When the ball is thrown his way, his hands are perfectly spread and shaped in a diamond (perfect technique). He attacks the ball and catches it away from his body and pulls it in immediately. Catching the ball with your hands is the tell tale of a natural pass catcher, and that is exactly what Decker is. Decker also has experience lining up at Wideout and Slot receiver. He is quick off the line, and avoids the jam with his strong hands and side step. He recognizes holes in the defense and gives the Quarterback a good throwing window. Decker is 6'3, 217 lb. athletic and polished receiver.

Now, I have a comparison for you. What I am about to say will probably catch some flack but I'm going to say it anyway. Eric Decker reminds me of Larry Fitzgerald. Hear me out before you attack, The way Decker leaps and meets the ball at its highest point, catches the ball away from his body, runs tough with the ball, and his body type is reminiscent of Fitzgerald. In my eyes, there are very few #1 receivers in this year's draft class. You're probably wondering why Decker when Damian Williams, Arrelious Benn, Mardy Gilyard, etc., are left on the board. Well ill tell you why, I consider Decker to be a true #1 receiver. Before his injury, Decker was making his case. He was the nations leading receiver. Check out his stats.

Since I mentioned injuries, lets explore Decker's. During week 6 of the 2009 season, Decker aggravated an old baseball injury. He attempted to play through it, and wasn't successful at it. Over the next two games, Decker was hampered and didn't produce nearly the numbers he did prior to the re-aggravation. Week 8 is when It all came crumbling down. His Lisfranc foot injury put him out for the remainder of the season. At the NFL Combine, Decker was not able to participate in the drills, and that left questions in many coaches and GM's minds. Without a shuttle and forty-time, it is difficult to gauge how a player will perform on the field and where he will be drafted. As the draft nears closer, Decker's stock is rising. Teams have gone back and watched his superb tape, and are salivating at the opportunity to add him to their roster. The foot injury isn't much of a concern. Many athletes have come back from it, and the doctor has told Decker that he is to go full out once the plate, screw, and boot are removed.

This is not the first time Decker has entered a professional draft. Twice, MLB teams have drafted him. He has declined to play in favor of his passion, football. Decker is a student of the game. His work habits will translate nicely to the NFL and his toughness will suite the Buccaneers offense nicely. With the Saints, Falcons, and Panthers all having #1 receivers, Decker comes in and gives the Buccaneers theirs.