Did Thomas Jones Get Jersey #20 From Donald Washington?

Share All sharing options for: Did Thomas Jones Get Jersey #20 From Donald Washington?

On the Chiefs roster at the moment, RB Thomas Jones has not been assigned a number. He's previously played with #20 but, according to the Chiefs roster, that number belongs to second year DB Donald Washington.

Or maybe it used to belong to Washington.

Check out this picture AP reader tomahawk44 pointed out to me: 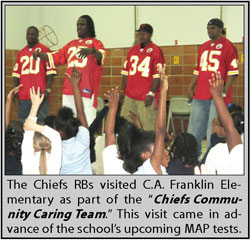 This image, courtesy of the Chiefs, shows Jones on the far left wearing #20.

It's unclear if that will be his official number. If I recall, the Chiefs actually assign jersey numbers to each player so technically they could give #20 to Jones and assign Washington another number.

Or they could tell the players to work it out amongst themselves.

The most famous of such deals was Clinton Portis agreeing to buy jersey #26 from Ifeanyi Ohalete. However, Ohalete was released and Portis stopped making the payments. That one ended up in court.