With The 40th Pick In The Arrowhead Pride Mock Draft, The San Diego Chargers Select...

Share All sharing options for: With The 40th Pick In The Arrowhead Pride Mock Draft, The San Diego Chargers Select...

tomahawk44 with the pick...

The Chargers lost LT in the offseason and now only have Darren Sproles as a threat out of the backfield. San Diego is not so sure that Sproles can handle the load so they take the best running back left on the board.

I introduce you to RB Jonathan Dwyer from Georgia Tech. 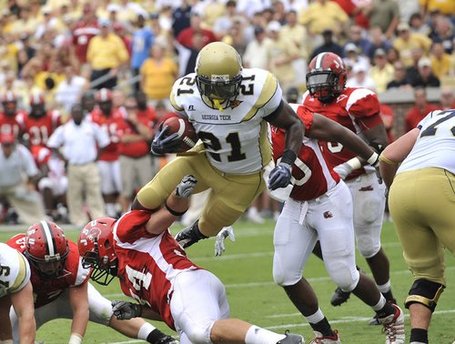 As a freshman Dwyer backed up Tashard Choice and racked up 436 yards and 9 touchdowns as a backup. After Choice left and headed to the NFL Dwyer produced 1,395 yards and 12 touchdowns which made him one of the most productive running backs in the nation. Dwyer left Georgia Tech after his junior year and will be entering the 2010 NFL draft after producing 1,898 yards and 23 touchdowns.

Dwyer will be more of a bruising back standing at 6-0 235 yards and that is exactly what the Chargers need to counter the fast agile Darren Sproles.Dwyer is known for breaking tackles and is a downhill runner that keeps his legs going until he goes down. Jonathan is also known to be a good receiver out of the backfield as well which will be very nice for the Chargers since they like to pass the ball and could use anothe option out of the backfield.