Teary-Eyed Marty On Chiefs HOF: 'This is the highlight of my career'

Share All sharing options for: Teary-Eyed Marty On Chiefs HOF: 'This is the highlight of my career' 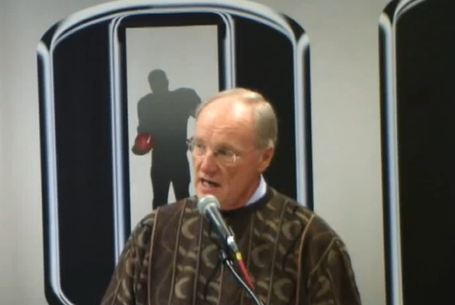 Remember a few months ago when we were wondering if Marty Schottenheimer was ever considered to be the presenter for Derrick Thomas' enshrinement to Canton?

Well, if they did consider him then I can see why he possibly passed because during the speech the cameras panned on him and he was crying pretty hard. Marty was always an emotional guy.

That continued last night at the 101 Banquet Awards when Clark Hunt took to the podium to introduce the newest and 40th member of the Chiefs Hall of Fame -- Marty.

"Quite a treat for me to find myself in this situation," Marty said last evening.

He went on to thank Lamar Hunt, Carl Peterson and everyone involved with the Chiefs. He said he had "never coached in an environment so positive and productive."

"I can remember Lamar sitting in a meeting prior to the draft where personnel was being discussed, and after we all got done talking, Lamar asked, "Excuse me, but can I interrupt?" And I'm thinking, 'This is the owner of our team of course he can interrupt. It's his franchise!'.

He went on to talk about the "sea of red" that became the norm at Arrowhead in the '90s as well as all the good people that they met throughout the years.

"It has definitely been a journey, especially in my career," he continued. "The things we were able to achieve has brought to me great gratification and great satisfaction.

"I certainly want to thank you so much, Clark, and the entire Chiefs organization because...(breaks down crying)....this to me is the highlight of my career. Thanks."