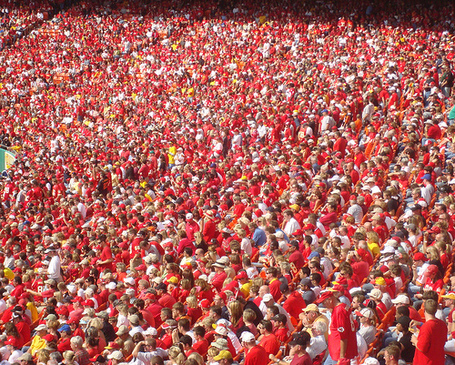 Greetings AP! We've got another batch of Kansas City Chiefs news for you this morning. Sadly, there are no stories about all of the awesome signings we made yesterday. Oh well. Also a heads up. I'll be on vacation for the next few mornings, so the brothers Thorman will be picking up my slack. Thanks to them in advance. Go Chiefs!

Of the league’s 32 teams, 12 did not sign a player on the first day of free agency. There were 11 other teams that signed only their own free agents players. That left the other nine teams creating all the activity in signing or trading for players: Atlanta, Baltimore, Chicago, Denver, Detroit, Miami, New York Giants, New York Jets and St. Louis. The Ravens and Jets were the teams involved in trades, with CB Antonio Cromartie leaving San Diego for the Big Apple. Then, WR Anquan Boldin was swapped by Arizona to the Baltimore for draft picks.

The Chiefs were one of those 11 teams that signed only their own player, RB Jackie Battle. The NFL rumor mill had them in the sweepstakes for Boldin. Reportedly they were interested in WR Kevin Walter as well, but he re-signed with Houston.

Among the Chiefs free agents, OL Wade Smith made a visit to Buffalo and will also head to Houston. Reportedly Washington is interested in TE Sean Ryan.

But Charles persevered and after the Chiefs unloaded Johnson, his season soared. Charles wound up rushing for more than 100 yards in five of the last eight games, including a team-record 259 in the season’s final game in Denver.

Those accomplishments didn’t get Charles to Hawaii and the Pro Bowl, but they did win for him the Derrick Thomas Award as Chiefs MVP.

Kicker Ryan Succop will be presented the Mack Lee Hill Award as Chiefs rookie of the year and the latest entrant into the Chiefs Hall of Fame will be announced.

Charles joined the party only after his spectacular second half of the season. He rushed for 968 yards in the final eight games, a pace that would have left him just short of 2,000 yards for a full season.

So I applaud the move, but only if it's a start. If the Chiefs have another free-agent year like the last one, when they cut many of their free-agent signings before or during the season, this move won't do any good.

But if the Chiefs add to their player haul with a better group of free agents and a more talented draft class than last year, the Vrabel signing can be looked at as a solid start.

One more thought on Chiefs free agency: It's unlikely another team would bite on any of the Chiefs' seven restricted free agents. But expect the Chiefs to take the draft pick rather than match the contract if and when any of them signs an offer sheet with another team.

Vrabel's not a bad start from The Red Zone

Jason LaCanfora of the NFL Network wrote in his blog Friday morning that one of the teams most interested in free agent running back Thomas Jones is the Kansas City Chiefs. Jones, age 31, was the leading rusher for the New York Jets team that went to the AFC Championship Game last season before losing to the Indianapolis Colts.

Jones (5-11, 212 lbs) was released by the Jets in February, mostly because he would have been due a $3.3 million roster bonus in March. Also, the presence of last years’ first-round draft choice, Shonn Green, made the decision easier. In 2009, Jones rushed for a career-best 1,402 yards and 14 touchdowns. In his 10-year career, Jones has rushed for 9,217 yards with 62 touchdowns and has caught 289 passes for 1,858 yards and three more touchdowns.

Hours before the clock struck midnight Friday morning and free agency kicked off, the news hit the Warpaint Illustrated premium boards – the Chiefs were interested in not one, not two, but three big-name players.

Julius Peppers, Karlos Dansby, Anquan Boldin. Big players, big names, big excitement. By far, it was the most exciting moment of the offseason for some Chiefs fans, comparable to the day Charlie Weis and Romeo Crennel became the franchise’s coordinators. I admit, when I heard the news, it even rivaled the joy I felt when Clancy Pendergast was fired as KC’s defensive coordinator.

But as the seconds ticked by, turned to minutes, and then hours, it soon became apparent nothing was happening while the midnight oil burned. Excitement turned to disappointment and Friday afternoon, when Peppers became a Bear, Dansby a Dolphin and Boldin a Raven, some Chiefs fans were downright angry.

almighty31 i want brandon marshall on my team.... period

almighty31 drivin the uhaul around. ladies would go on a date wit me n a uhaul? lmao

GlennDorsey72 I-12 is a pretty smooth ride .. Wit my dawg headed to the Sip

GlennDorsey72 In Hattiesburg mall clownin wit the fam.... They sick yo!!!!

JoshLooney Looks like lots of Chiefs fans getting antsy with all the UFA/trade rumors...and we're only in Day 1!

SI_JimTrotter 4 all the talk about thomas jones rejoining the jets, i'm told by sum1 close to him that he's too prideful to return to a team that cut him

JoshLooney A Day in the Life: Behind the scenes with Scott Pioli at the NFL Combine - http://bit.ly/9q8OzO

Adam_Schefter Very bad for the the Cardinals. Very busy day for the Bears. Very intriguing day ahead for the Seahawks.

Adam_Schefter RT @EricStangel NFL Free Agency Update - The Bears are getting carried away. They just signed the groundskeeper to 6yr/$72 million deal

kb_kcstar The next few days will determine, if nothing else, my opinion on whether the Chiefs are trying to be competitive in the immediate future.

Adam_Schefter Filed to ESPN: For the first time in two days, I'm going to bed.