Could The Chiefs Use Another Veteran Receiver?

Share All sharing options for: Could The Chiefs Use Another Veteran Receiver? 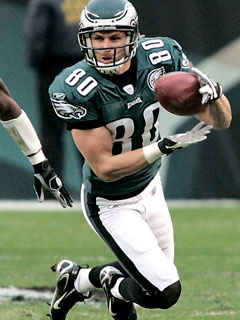 There's plenty of new faces around Arrowhead this time of year for the beginning of mandatory, er, voluntary off-season workouts. And there will be plenty more on the way after the draft and undrafted free agent signings come to town. However, with a few weeks left before the 2010 draft, I'm wondering if Scott Pioli is mostly finished making any changes to the roster before the big event.

The reason I ask is because there's still so many holes left with only a few high-round draft choices. While we all wish that Pioli would strike gold on every single pick in every single round, we should also be realistic in its possibility as well. Last year's fourth round brought us Donald Washington, for example, so expecting us to pick up the next great middle linebacker in such rounds is hoping a bit too much. The reality is that those rounds might reveal a gem, but they're usually longer term development projects. The idea, then, comes back to overall player acquisition and the curiosity if Pioli has any more things in mind pre-draft.

Of course, there's lots of movement after the draft as the young guys make an impression and knock some veterans -- sometimes quite impressive ones -- out of their spots. Still it'd be nice to maybe solidify one or two more spots before going to the draft with a shopping agenda the size of a Thanksgiving meal grocery list. One main idea I'd love to consider: Grab another veteran receiver.

More after the jump:

This doesn't mean that Chiefs should not take one in the draft if a prime guy becomes available. But grabbing another target on a team in need of them would be a smart move at this stage. Perhaps some better names become available, but I look at a guy like former Eagle Kevin Curtis and think he could come in and compete. He's been injured the last two years to major degrees, so it's not a guy you depend on, but that's not what the Chiefs need at this point.

What they need is a complementary receiver who can be another dependable target for Matt Cassel in the passing game. Thomas Jones and Jamaal Charles form a fantastic backfield and the Chiefs brought back Chris Chambers. Of course, fans always hope that Dwayne Bowe will make good on his potential, but there's really no one after that. Sure, names like Jerheme Urban and Lance Long might have potential, but I'll take Curtis in a heartbeat.

Curtis is a quick receiver who plays intelligently and runs routes very well. He also has the speed to get downfield if need be. He grabbed 77 passes for 1,100+ yards just two seasons ago, so he's able to step up and become a primary target and he did the same for the Rams for several stretches. The last two seasons, he's been limited to only 12 games played and 39 total receptions, so it's hard to tell what you're getting. But he's a smart player who's shown he can be an asset in the passing game. And at this point, the Chiefs could use another smart, dependable (when healthy) wide receiver.