With the 22nd Pick in the Arrowhead Pride Mock Draft, the New England Patriots Select...

Share All sharing options for: With the 22nd Pick in the Arrowhead Pride Mock Draft, the New England Patriots Select...

As a "New England West" fan, drafting for the original Patriots should be pretty straight-forward., Chiefs fans should be VERY familiar with the drafting style and philosophy of the Patriots, so I don't feel the need to rehash the strategy of the one known as "hoodie."
New England team needs are WR, Pass Rushing DE/OLB, 3-4 DE, RB, TE, to name a few.
The once dominant Patriots are struggling to stay on top of the AFC East, and rumors of locker room chemistry issues have persisted...
BB took care of some business this offseason, making it a priority to KEEP their best players, rather than go on a UFA spending spree.  Much to the disappointment of would-be "buyers," they signed Wilfork, Neal and Bodden, and they are working on a deal for Mankins.
The NFL generously awarded New England with FOUR compensatory picks in this draft, so the Pats have plenty of "ammo" to fill needs in this draft.
The first round priority, as is tradition, is the defensive front 7.  Many mocks have the Patriots taking the best pass-rushing OLB available, such as Kindle or Hughes, either of which could be a solid choice.
However, I think "New England East" will choose the safer, less flashy option, grabbing a blue-collar 3-4 DE to help fill the opening left by Seymour's departure to the "place talent goes to die" (Oakland).  The Pats will hope that Hughes or Sapp fall to them with one of their 2nd round picks.
Choosing a high-motor DE that wears #91, coming from Penn State worked for KC .... so...
With the 22nd pick in the 2010 draft, the New England Patriots select:
Jared Odrick, DT/DE  Penn State
Odrick's draft stock has been rising rapidly this offseason, especially with his strong showing at the Senior Bowl.  He's solidified his status as a first round pick, and coaches and GMs love his work ethic and motor. 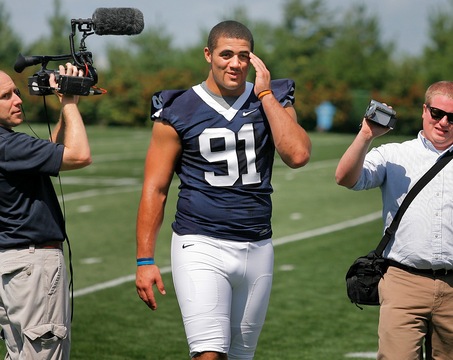 "But make no mistake, Odrick is a solid player. He may never be a superstar in the NFL, but he's a dependable three-down defensive lineman with good strength and tenacity." -Link

This draft is loaded with tweeners, but there are not a lot of players with the ability to play 3-4 DE, something Odrick excels at. If you, however, pick Sergio Kindle, grabbed someone like Corey Wotton with our 1st second rounder. If Odrick, we would like Eric Norwood with that same pick. We would like someone like Damian Williams or Mardy Gilyard for our 2nd second round pick. The third second rounder could be a RB like Montario Hardesty or Toby Gerhardt, some powerhorse back who could bust through the defense in the redzone. From there, we could grab Spikes at the last 2nd rounder if he falls that low. We plan on getting a TE at the 4th round due to the signing of TE Alge Crumpler.