With the 21st Pick in the Arrowhead Pride Mock Draft, the Cincinnati Bengals Select...

Share All sharing options for: With the 21st Pick in the Arrowhead Pride Mock Draft, the Cincinnati Bengals Select...

The Bengals need a lot for being a playoff team which is never good. I will keep this short and simple. This pick can help them more then anything. I have never been a fan of picking interior o-line in the first round. So that's not going to happen from me, sorry bengal fans.

With the 21st pick the Bengals choose.... 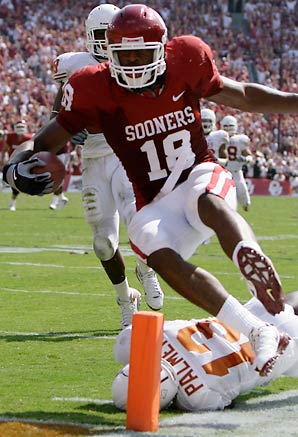 The biggest need is catching and blocking people might not think this pick is a big blocker but hes really raw and has skills. No-one needs to question his hands. I put some stat descriptions in this for the stat guys. My work has gotten a little crazy lately so If anyone wants the 2nd round they can have it. Hopefully for the Bengals fans, this guy can be there Tony G. for the next decade.

Gresham could have fought fellow Big 12 stud tight end Brandon Pettigrew for top draft honors at the position last April, just like they battled for All-Big 12 honors in the fall of 2008. As Gresham won first-team accolades from league coaches, he likely would have been selected ahead of Pettigrew (No. 20, Detroit).

But the All-American decided to return for one more year with Heisman Trophy winning quarterback Sam Bradford. Unfortunately, neither player was a factor in the Sooners' 2009 season. In August, Gresham tore ligaments in his right knee which required surgery, effectively ending his season before it began. Bradford suffered a shoulder injury in the season opener and only played two other games before shutting it down for the year. Now those two, who hooked up 66 times for almost 950 yards and 14 touchdowns in 2008, have decided to head to the NFL.

Release: Despite his height, he gets off the line quickly whether standing up or in three-point stance. Finds second gear to accelerate past linebackers. Does not face the jam often, and must learn to use his hands to defeat it.

Hands: Has worked hard to improve consistency here, and makes some very difficult catches in traffic - but still short-arms some balls and allows others into his chest. Adjusts to poorly thrown balls in any direction. Typically secures the ball before heading upfield, but gets a bit loose on occasion. Superior height and excellent vertical for his size make him a top jump ball target.

Route running: Runs short, intermediate and deep routes effectively. Smooth runner. Quicker feet than expected, and runs tight routes inside and out. Sits down in zones and presents a large target. Will use head and body fakes before planting to cut. Constantly threatens the deep seam, as teams use a cornerback to cover him. Uses his big body to shield defenders over the middle and especially in the red zone.

After the catch: Runs like a large wide receiver but is as strong as an ox after the catch. Makes defenders miss with a quick stop move and is strong enough to push oncoming tacklers by. Also able to leap defenders going for his legs. Not in the Tony Gonzalez mold for fluidity but comes fairly close. Will lean forward to run through arm tackles, sometimes requiring three defenders to bring him down.

Blocking: Effective, if not dominating, blocker in-line and on the edge when lined in the slot or in motion. On run plays he will get wide and put hands into the numbers to anchor. Latches onto defensive backs on downfield blocks, and will take them 25-30 yards downfield in front of screens. Strong enough to pancake smaller ends crashing down the line. Could be more consistent using his hands and feet to sustain. Must learn to pick up corner blitzes.

Intangibles: Proving his ability to come back from injury would be a big boost to his character grade. Team player who blocks with the same vigor he shows after the catch. Arrest for failing to appear to settle a speeding ticket in April 2009 should not have a significant impact on his draft stock.

Thanks to CBSsports.com for the information and there hard work.