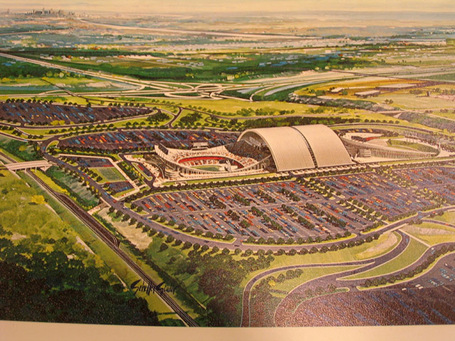 The pro football world has been focused on Lucas Oil Stadium for the better part of the last week as the NFL Combine went down.

What a gold mine for Indianapolis. There were more than 2,000 visitors checked into hotels at the end of February. That’s a convention business that any city would love to have in the winter months, especially one where the snow fell for several days. That’s 11,000 to 12,000 hotel room nights for the week. Indianapolis’ downtown restaurants were packed all week with club personnel, agents, folks from the NFL Players Association, media, job seekers and players.

And all of it – the Combine, the hotel nights, the packed restaurants, the newspaper and Internet datelines – could have been in Kansas City.

What Could Have Been … Wednesday Cup O’Chiefs from Bob Gretz

A popular option among the fans last year was to sign Orlando Pace and put him at left tackle in hopes of upgrading the offensive line.

The Chiefs made no move for Pace and he wound up signing a rich contract with the Bears. Pace was so bad the Bears just dumped him but are out some serious cash for their mistake.

So credit to the Chiefs for not just taking the plunge for a big name. In this case, and probably some others, they're better off having been out of the game.

That said, the Chiefs must have a better experience with free agency than last year. And they can't ignore their quarterback again.

When Joe Haden went off to college at the University of Florida he planned on playing quarterback. There was one problem with that: the Gators already had a quarterback, fellow by the name of Tebow, first name Tim...

...He moved to cornerback and after three years, he’s preparing to move on to the NFL. Coming into the 2010 NFL Combine, Haden was rated as the No. 1 pure cornerback prospect and is considered a top 10 choice in April’s NFL Draft.

Haden talked about his changing of positions and his future at Lucas Oil Stadium.

Monday’s NFL Scouting Combine highlighted the defensive linemen and linebackers, two places where the Chiefs could use a major influx of talent. Two tackles, Nebraska’s Ndamukong Suh and Gerald McCoy of Oklahoma are expected to go in the top three picks, so it’s highly doubtful either one of them will be available for the Chiefs. After that, however, the Chiefs might make someone who starred at the Combine Monday with their first pick.

One thing Chiefs fans learned last year is that Head Coach Todd Haley and General Manager Scott Pioli won’t hesitate to take someone projected to go in the lower half of the first round with a Top-5 pick (see: Jackson, Tyson LSU) if the Chiefs can’t trade out of that pick.

Here are the prospects from Monday that stood out to me:

Defensive stars shine at Combine and the Chiefs could bite from Examiner.net

Football legend Billy Cannon is the LSU Alumni Association’s Alumnus of the Year.

He will be inducted into the association’s Hall of Distinction on April 16.

The LSU All-American halfback led the 1958 team to the Tigers’ first national championship. He won the Heisman Trophy as a senior and remains LSU’s only Heisman winner.

Cannon’s 89-yard punt return on Halloween night in 1959 against Ole Miss is ranked as one of the most dramatic plays in college football history.

Cannon enjoyed a nine-year career in the American Football League — with the Houston Oilers and the Oakland Raiders — and ended his professional football career in 1970 with the NFL’s Kansas City Chiefs. He was named to the College Football Hall of Fame in 2008.

The exhibit is a collection of papers, photos and memorabilia of the Prairie View Interscholastic League (PVIL). The PVIL, which began in 1920, served as the governing body for Texas’ African American high schools until 1970 when the University Interscholastic League (UIL) assumed the role. At its peak, the PVIL represented 500 schools...

...The PVILCA board tries to award at least 40 lifetime memberships each year. The youngest living participant is 57.

Two highly anticipated 2010 inductees are Otis Taylor of the Kansas City Chiefs and Charles Edward Greene — or "Mean Joe" — of the Pittsburgh Steelers. A lifetime membership only requires that an individual be a high school graduate and a former PVIL athlete or coach.

The Chiefs contingent joined the rest of the league in Indianapolis for the NFL Combine and the depth of talent in this year's class has the club excited about holding three of the first 53 selections and eight choices overall.

"There's quite a bit of talent," said head coach Todd Haley. "What has me excited is not only the fifth pick (in the first round) but the two (second-round picks) and the fact we'll have the chance to acquire a handful of players that can have an impact in a short amount of time."

Impact is definitely needed for this Chiefs draft as the team continues the rebuilding process.

JarradPage44 Along with Paid in Full and Menace II Society. Lmao RT @ChananLuvs I need a 5 dollar foot long in my life

GlennDorsey72 Took a long nap look like Ima be up all night!!!!! Hopefuly I don't get in trouble!!!! (kidding)

JarradPage44 Jus seen a dude ridin down the street with rims that cost more than his car. Lmfao #thatsnotpimpin

almighty31 jus got home after seein my mom and son

Broslife Looks like it's four more years until "I'm an Olympic bobsledder" will get you laid again.

JPosnanski It's that time of year. Here's just a touch of optimism ... from a Royals season ticket holder. http://bit.ly/dvMKpf