With The 17th Pick In The 2010 Arrowhead Pride Mock Draft, The San Francisco 49ers Select...

Share All sharing options for: With The 17th Pick In The 2010 Arrowhead Pride Mock Draft, The San Francisco 49ers Select...

I said in my last pick that I thought the next best offensive tackle would still be there for the 17th pick.

The offensive line is definitely the weakest link for the 49ers, and a solid line could lead the team to the playoffs in a weak NFC West next year.

With this pick, Mike Singletary will address this need and take... 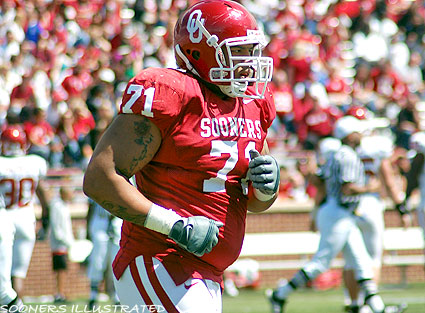 The Niners could put Williams at RT or move Joe Staley to RT and Williams could start at LT.

Williams is projected to be an above-average to elite run blocker and an above average pass blocker. With him and Staley as bookends for the line, Gore could become a leading rusher again, and Alex Smith would have time to get passes into the hands of his stud receiving targets.

With one of the top defenses in the league, this pick should make their offense serviceable enough to make a playoff run in 2010-2011.