With The 15th Pick In The 2010 Arrowhead Pride Mock Draft, The New York Giants Select...

Share All sharing options for: With The 15th Pick In The 2010 Arrowhead Pride Mock Draft, The New York Giants Select...

The New York Football Giants have been on the cusp of being dubbed a dynasty after shocking the world and beating arguably the best team to ever step onto a football field in the New England Patriots in Super Bowl 42. Without the draft, the heart of this New York Giants football team would not pump...the draft is it's bloodline.

GM Jerry Reese has been with the Giants organization since 1994. After taking over for Ernie Accorsi in 2007, he has been money with his draft picks. In his first year (2007) as GM, Jerry Reese had 11 picks to play with. Little did he know later that year more than half of those picks would contribute heavily to bringing a Lombardi Trophy back to New York as the Giants went on to win the Super Bowl that same year.

Now here we are, on brink of the 2010 NFL Draft, and the New York Giants hold the 15th pick overall. After adding Antrel Rolle through free agency their defensive backfield woes seem to be fixed, for now. Right now this defense has no leadership with Osi Umenyiora's diva-attitude, Justin Tuck's injuries, Antonio Pierce leaving, and so on and so forth. Due to last year's let down, and the departing of Antonio Pierce, this team needs a new quarterback for their defense. But their linebacker position needs to be addressed. Newly acquired defensive coordinator, Perry Fewell, needs a new spark to light a fire to this Antonio Pierce-less linebacking core. They are going to look for someone who can fill the void at inside linebacker, and be the new face of this defense for years to come. Who will that pick be? Let the drum roll begin... 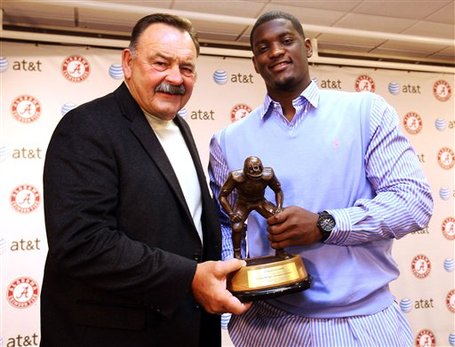 Well there it is. To be quite honest I'd be shocked if McClain dropped to 15. He is the one guy on this draft board who has the smarts to come in and have a Patrick Willistype effect on this defense. What do I mean when I say Patrick Willis type effect? I mean he can step in day 1 of camp, become a leader for this defense and have a rookie year similar to the one of Patrick Willis did when the 49ers drafted him. Rolando was a very smart linebacker at Alabama and will transition himself to be that type of ILB who can quarterback a defense in the NFL.

Sure, you can make the argument that Rolando will fit much better into a 3-4 defensive scheme than Perry Fewell's  4-3, Cover 2 defensive scheme...even Rolando has said it himself that he is more comfortable in a 3-4. Will all do respect Rolando this is the NFL, and this is nothing a little coaching and polishing can't fix, and the Giants know that. The point is, the Giants and all of AP know Rolando McClain is the best linebacker in this years draft, and I believe the Giants will see that and not play around to let McClain go past pick #15. Jerry Reese is spot on when it comes to drafting the best player available on the board for his team and usually doesn't make a mistake when it comes to the first three rounds of his draft, let alone the draft itself.

So If the Dick Butkus Award winner is there at 15, Rolando is the man. After making the pick, the Giants can breathe a heavy, comfortable, settling sigh of relief with the notion they just drafted possibly the best linebacker to wear a Giants jersey since the great Lawrence "LT" Taylor. Yeah, I just said that.