With The 16th Pick In The 2010 Arrowhead Pride Mock Draft, The Tennessee Titans Select...

Share All sharing options for: With The 16th Pick In The 2010 Arrowhead Pride Mock Draft, The Tennessee Titans Select...

I consider myself a pretty big football enthusiast. I try to follow the game as much as I can. I love reading all of the draft magazines and studying them (albeit mostly while I'm on the can), and I pride myself on knowing more than most my friends when it comes to draft prospects. But I will be the first to admit to my fellow Arrowhead Pride followers that I had a very hard time deciding who to select by the time the Titans got around to picking at 16. A couple of the prospects I had hoped for were drafted a few slots before I picked (Pierre-Paul, and Haden come to mind. I have no idea how Haden dropped this far, but I was sure as heck hoping he'd fall a few more spots right into my lap).

One thing was for certain; I felt like I had to get maximum value with this pick, seeing as the Titans don't have a second round pick in this year's draft. I was looking for a player that fit the Titans scheme, was versatile, and a high character prospect.

The pick follows after the jump. 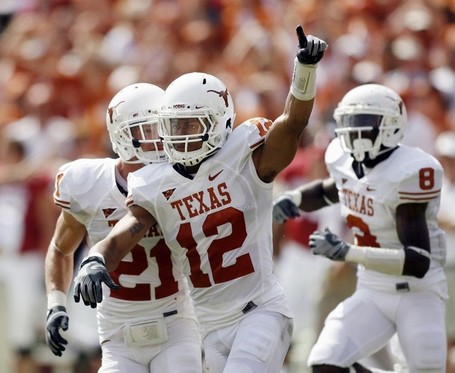 And so now; with the 16th pick in the Arrowhead Pride Mock Draft, the Tennessee Titans select Earl Thomas, safety, University of Texas.

When making this selection I put myself in the GM role for the Titans. I wanted to draft a kid that I would honestly want to draft if I were running this organization. That meant that I took a lot of different factors into account. One of these factors is character. I wanted to draft a prospect that had a good head on his shoulders. From all that I can gather, Thomas passes this critical test with flying colors. I considered Carlos Dunlap here (looking to fill the Titans' need for a pass rusher), and the prospect that seems to be the consensus pick for the Titans in most mock drafts, Sergio Kindle, but I didn't want to risk a first round pick on a guys that could potentially have off the field problems down the road. Both Dunlap, and Kindle have had off the field issues already.  Pro Football Weekly gave this report on Kindle's mind set;

"Immature. Character will be scrutinized after a DWI in 2007 and a one-car accident in which he damaged a building and left the scene. Is rough around the edges and considered too much of a follower."


Now I understand that these are kids. Everyone makes mistakes, and there are some reports that Kindle has matured since that incident, but I'm not the kind of GM that wants to bank part of my team's future with a first round pick on a kid that might be dealing with maturity issues. Obviously, this means that I decided against Dunlap as well based off of his well documented off the field issues.

Another negative I had against Kindle was the fact that he's more suited to play in a 3-4 defense, and I wanted to select a player that would fit the defense that the Titans employ. I see him as somewhat of a tweener in the NFL (I felt the same way about Brandon Graham as well). Honestly, at the end of the day, I was torn between Thomas (who I think will end up being the better pro that fills a need), and Kindle (who fills a bigger need). I was basically splitting hairs between the two players, but at the end of the day I choose Thomas with the idea that he's versatile, has a high motor, has huge upside, and has a clean slate off the field.

I must admit, the more I studied up on Thomas, the more I fell in love with the kid. I understand that the Titans are looking for a pass rusher, and that is probably their greatest need, but I am a firm believer in the theory that you pick the best player available in the first round, and for me, that was Thomas. Many experts project that Thomas is athletic enough to play corner, which is one of the Titans' glaring holes on defense.  And in the worst case scenario that he for some reason couldn't make the transition from safety to corner in the NFL,  Tennessee will have a replacement for the aging Chris Hope that could team up with Michael Griffin for years to come. Thomas is versatile, confident, and has a lot of upside.  NFL expert analyst Mike Mayock went as far as to rank Earl over fellow prospect Eric Berry, who many consider to be the best safety prospect to come out of the college ranks in years.

The only real concern in Thomas' game is his size. Pro Football Draft agrees that he is on the small side, but "After a year in an NFL weight room he should be one of the better safeties in the league."

At the end of the day Thomas' versatility was what probably finally swayed my decision. The most instinctive safety in the draft, that has all the skills to become a very good corner/great safety in the league is the pick. I felt like I could have went numerous directions with this pick, but I wasn't totally sold on any of the OLB/DE prospects available at this point,and I felt like it was vital to draft defense with the pick. I contemplated  Boise State CB Kyle Wilson at this spot as well, but  I think Thomas will be special in a couple of years.

Looking forward to hearing everyone's thoughts on the pick, and I'm glad I could be a part of the mock.