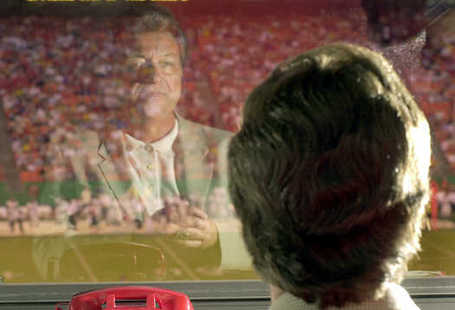 Good morning. A decent number of stories today. We're going tweet-free so I can leave for work a little earlier (have a meeting). Enjoy your Kansas City Chiefs news! I know most of you will love the photo. =)

One of those subjects was television blackouts, which should be on the minds of all Chiefs fans as the month of March comes to an end and the 2010 season is now less than six months away.

Nobody within the Chiefs will go on the record when it comes to how many season tickets are spoken for with this fall’s home schedule. But a little birdie told me the number at this point is less than 40,000. It’s the lowest number of season tickets for the Chiefs since the 1988 season.

Obviously there’s a lot of time to sell tickets, but with a 10-38 record over the last three seasons and a very ordinary lineup of teams coming to Arrowhead Stadium, the potential for blackouts will be there each and every week.

So he still followed, if from a distance, the dismantling and subsequent rebuilding of the franchise he operated, for better or for worse, for 20 years as the Chiefs’ president and general manager.

"Lots of changes with the Chiefs," he said wistfully during a break at the NFL’s annual owners meetings. He was in Orlando helping a friend, Miami Dolphins owner Steve Ross, market hand-held video devices to other teams and their fans.

"They made changes last year, and it looks like that’s continuing," Peterson said. "Change is good. Hey, I made a lot of changes when I came in, too. When people you hired are no longer there, you feel bad for them. But life goes on."

Long after his career ended, Saleaumua continues to give back. Fans can help him assist the American Cancer Society by taking part in his Swing for the Cure Golf Tournament.

Set for Deer Creek Golf Club in Overland Park on Saturday, May 10th, Sal will join golfers for 18 holes, lunch and an awards presentation after the round. The shotgun start is 8 a.m. For an individual the cost is $125 and its $400 per foursome. All proceeds will benefit the American Cancer Society.

While we always say the best way to build up a team is through the draft, there is a pattern emerging here. So far three of the teams that picked in the top five in the 2009 draft are picking in the top five of the 2010 draft. This seems to suggest either there was more than one draft’s worth of work to be done, or that bad NFL teams made bad NFL decisions. I leave that to all of you to figure out amongst yourselves.

I was pretty skeptical of the decisions the Chiefs made in the 2009 draft. It did not seem to be a particularly good draft, and  the only thing that helps to save its reputation is the traded away their second round pick for a potential franchise QB. Otherwise I have to say this was a pretty poor draft. A look at their 2009 picks:

It's been a busy couple days for Central Michigan

On Wednesday, the 6-foot-3, 238-pounder was on the CMU campus throwing for coaches and scouts from 31

teams at the school's pro day.

LeFevour, who only took part in throwing drills, completed 55 of 62 passes, but wasn't entirely satisfied with the performance.

"I always want to do better," he said. "I don't think I hurt myself at all today. But I can say I looked better two days ago -- without anyone here."

Alabama’s 2010 Coaching Clinic will once again feature some of the top coaches in football. The clinic begins Thursday evening and concludes Saturday. This year’s lineup includes two of the most successful head coaches at the NFL and college level in Marty Schottenheimer (Cleveland Browns, Kansas City Chiefs, Washington Redskins and San Diego Chargers) and Danny Ford (Clemson and Arkansas).

The second event is the California Sports Hall of Fame Golf and Induction Gala, which was held on Sunday, March 21 at the Industry Hills Golf Club, just east of Downtown Los Angeles. Brendan donated 200 travel bags for the organizer, former NFL Kansas City Chief Running Back Christian Okoye, to fill with tee prizes for each golfer participating. Extra bags were also provided for the tournament volunteers.

One might note that Merlin Olsen was inducted in the California Sports Hall of Fame just after passing away last week, a sad day for the world of sports and all of those who knew and loved a man who was a giant in every phase of his life. Everyone remembers his stellar play on the field, his fine example off the field and the many years he spent with Dick Enberg as a analyst on football broadcasts. A great guy indeed.

University of Buffalo safety Mike Newton is scheduled to work out for the Philadelphia Eagles next week in Baltimore, according to a source close to the program.

Newton visited the Indianapolis Colts last week, per our source.

Newton made a strong impression on NFL scouts during his campus Pro Day workout.