With The 11th Pick In The 2010 Arrowhead Pride Mock Draft, The Denver Broncos Select...

Share All sharing options for: With The 11th Pick In The 2010 Arrowhead Pride Mock Draft, The Denver Broncos Select...

This is tough one, ladies and gentleman. And not just because picking for the Broncos is a lot like a kissing your sister.

I consider the duty in a mock draft is to project who you feel the team you're choosing for will take, not whom you would select.

Also, when making a decision on the #11 pick, I feel I'm left with incomplete information.

Brandon Marshall, in my opinion, has very little chance of being in a Broncos' uniform next season. Could it happen? Sure it could. But when your head coach benches you, with the playoffs on the line, against your division rival...I don't see how said player comes back the following season.

Brandon and the Broncos' are saying the right things now, but that's to try and protect Marshall's trade value. I'm sure that the Broncos told Marshall (or more likely his agent) that he has a much better chance of getting traded, or an offer sheet signed if he keeps quiet and says the right things. Since the offseason started, he's mostly done that.

I think Marshall will end up in a Seahawks uniform. A compromise could get worked out...I don't see any way Denver ends up getting the #6 overall pick. But maybe with a 2nd rounder this year and 3rd next season a deal gets done.

There also have been some recent revelations regarding Marshall being the intended target in the murder of teammate Darrent Williams. Look, it's probably better for everyone if the guy moves on.

And Marshall's status as of draft day, or at least by the time the #11 pick rolls around is, in my opinion, the leading indicator of which direction the Broncos are going with their first round selection.

Let's take a look at the Broncos depth chart at WR without Marshall:

Also, remember that the boy wonder in Denver wants to run a 3-wide offense.

I think Marshall's gone, and I'm guessing the Broncos will gamble on his replacement with this pick. Maybe it's because I spent the weekend in Vegas for the NCAA tourney and I'm in a gambling mood. Maybe it's because I think McDaniels is just too damn cocky and wants to show his offensive ‘genius' and feels grabbing a WR is the only way to do this... 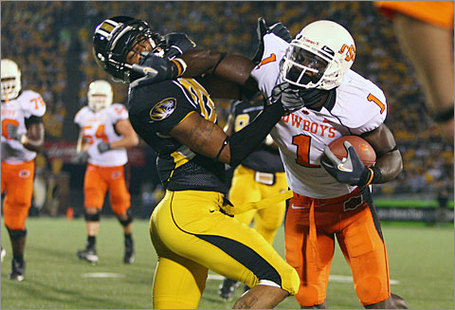 But with the 11th pick, the Denver Broncos will be selecting Dez Bryant, WR Oklahoma St.

I feel like the AP community knows the talent that Dez has, and I don't need to spend too much time discussing his talent.

I also realize most of you know the arguments against him, and no I can't make them better than they were made over at MHR. Guess what, guys, I wouldn't take him myself.

If I were Denver, and he was available, I would be snagging AP favorite Ro' McClain and smile on my way to the podium to take him.

But I'm not making the actual pick. Wonderboy is. And I would remind everyone that last years' first round pick Robert Ayers had off the field problems as well.

I may look very foolish come draft day, especially if Dez does something else stupid between now and April 22nd, but it's what I'm going with. Hey, plus I would get to root against him, and I really don't want to do that with McClain.