Share All sharing options for: Announcement On Chiefs Home Opener Should Come Today 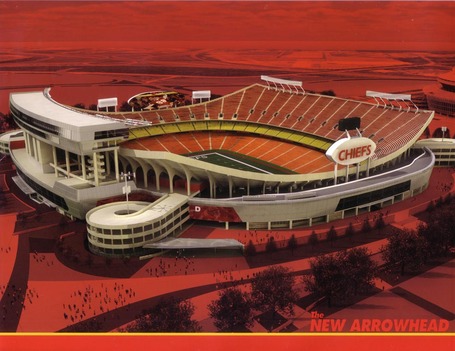 [Update 8:01 AM: Maybe not. John McClain of the Houston Chronicle writes, "NFL just told us there will be no announcement today on opening-weekend games. That means to Thanksgiving games, too."]

Clark Hunt, the Kansas City Chiefs and the city of Kansas City have put in a few bucks to renovate Arrowhead stadium.

And, as we mentioned yesterday, usually when a team gets a new stadium -- or in the Chiefs case put hundreds of millions in it for renovation -- the league awards them with a prime-time, nationally televised setting to unveil it.

The Chiefs owner actually requested a prime-time setting to launch the 'New' Arrowhead.

"The league is aware of our request," Hunt told the Kansas City Star yesterday.

The announcement was originally expected to come yesterday at some point but reports indicated it would be pushed back to today.

What's your guess? Is game one at the new Arrowhead a nationally televised game?