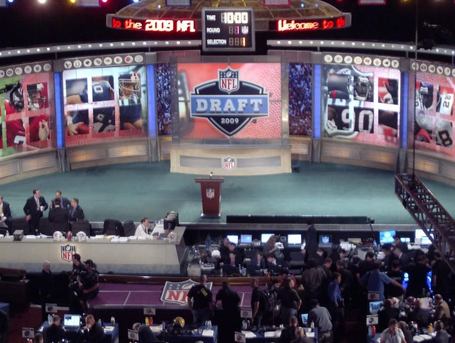 Are we there yet? (Photo source)

Hello Saturday. Lovely day here in Jersey, but looks like less so for you KC folks. Here's your Kansas City Chiefs news to help keep you warm and fuzzy on the inside (or you can just drink).

Also, be sure to read this post and fill out the survey. We have a ton of members here at AP, so it will take a lot for us to have the highest %. Help send $500 to AP's favorite (and still to be determined) charity. It's quick and easy.

I like what Pioli is doing with the Chiefs, but I’d love it if he’d pick Berry. The problem is you can’t have everything, and my gut says that taking Berry that high would go against what Pioli wants to do.

History doesn’t suggest it either. The last safety taken with a top-five pick was nearly 20 years ago, and that was Eric Turner in the 1991 draft. So every other decade, but it almost never happens. Still, it doesn’t stop fans from wishing this time it’ll be different.

I know folks are tired of hearing about the Patriot connection, but Pioli is from that fold. When trying to figure out what he might do, especially in the draft, New England provides a good road map.

Will Chiefs stick with a building block or go for the popular pick in draft? from The Examiner

A history of picking their spots from ESPN

It’s hard to imagine that the Kansas City Chiefs are in the market to add another running back to the fold after Jamaal Charles had a breakout season last year, and they signed former Jets featured back Thomas Jones to a two-year deal. But, there’s no harm in looking for a diamond in the rough, and it appears that the Chiefs have their eye on a runner in this year’s draft that’s off-the-radar, Arizona State’s Dimitri Nance.

Scout.com has learned that the Chiefs will hold a private workout with Nance on March 24th and host him in Kansas City for a visit on April 13th.

The Chiefs have made some positive moves this past week, but the team knows a lot more has to be done. They need a right tackle and depth.

I thought I would expand a bit and give some statistics you will rarely see anywhere.

First of all, this OL was bad last year, but that's in the past.

Lets look at the starters at this point.

The University of Oregon held two Pro Days this month, and the second of the two featured the Ducks two top prospects, running back LeGarrette Blount and safety T.J. Ward. Blount has been one of the most impressive players this offseason, while Ward has been trying to get his name back into the spotlight, after missing five games this past season with an ankle injury. Ward took a positive step on Thursday (March 18th) when he improved on his 4.56 40-time from the Scouting Combine and turned in an impressive 4.47 in front of scouts at Oregon’s Pro Day.

Ward is one of the most talented safeties available in the 2010 draft, and he’s starting to receive the recognition he deserves. Scout.com has learned that Ward had a private workout with the St. Louis Rams on March 16th and will visit the Kansas City Chiefs on April 1st.

With 23 professional teams in attendance, 14 former Blue Raiders were put through their paces at Floyd Stadium Thursday afternoon, as MTSU held its annual Pro Day.

In all, 22 NFL teams were present, represented by 23 scouts. There were some familiar faces in the group, including former Nashville Kats coach Pat Sperduto - now a scout for the Kansas City Chiefs - as well as Tennessee Titans defensive line coach Jim Washburn.

Scouts turn out for MTSU Pro Day from BlueRaiders.com

Virginia Tech free safety Kam Chancellor repeated the 40-yard dash on Thursday at the Hokies’ pro day in Blacksburg, Va., and participated in positional drills as the buzz for the experienced performer continued to grow a little.

Chancellor had a private workout earlier this week for the Kansas City Chiefs and has one scheduled with the New England Patriots. He’s also got a visit lined up now to the San Diego Chargers, who are interested in a safety with range.

Weatherspoon, the biggest star among Missouri’s NFL hopefuls, was just an observer as several former Tigers worked out for NFL scouts yesterday inside the Devine Pavilion during MU’s second pro day.

Projected as a likely first-round pick in next month’s draft, Weatherspoon had a private workout with the Atlanta Falcons on Wednesday in Columbia, meeting with General Manager Thomas Dimitroff, Coach Mike Smith and defensive coordinator Brian VanGorder — the same core responsible for selecting Missouri safety William Moore in the second round of last year’s draft.

The Falcons put Weatherspoon through a series of linebacker-oriented drills and tested his knowledge of different defensive plays and coverages.

Weatherspoon said he has a visit with the Kansas City Chiefs scheduled for the end of the month and has been in talks with the New Orleans Saints about visiting the Super Bowl champs.

Port Arthur native Jamaal Charles, for being enshrined in the Museum of the Gulf Coast in Port Arthur for his prowess on the football field. Charles first dazzled area fans with his play as running back at Memorial High School and became the region's only two-time winner of the Willie Ray Smith Award. He then went to the University of Texas, where he helped the team win a national title in 2005. In 2008, he was drafted in the third round by the Kansas City Chiefs. Last year, he took over the starting job after the team released Larry Johnson, becoming the first NFL player to rush for more than 1,100 yards on fewer than 200 carries.

BOUQUETS and BRICKBATS from Beaumont Enterprise

GlennDorsey72 Kansas City, MO>RT @NextDanPatrick: @GlennDorsey72 Yeah man, & I'm in Indiana! So where are you at that it's snowing? Ha ha!

On a personal note, I gave my ex-girlfriend a Vasher Bears jersey for a gift once, so this next tweet made a small part of me smile.