With The 8th Pick In The 2010 Arrowhead Pride Mock Draft, The Oakland Raiders Select...

Share All sharing options for: With The 8th Pick In The 2010 Arrowhead Pride Mock Draft, The Oakland Raiders Select...

Mushin with the pick...

It's my favorite time of year. I get to dress myself like a 70's ninja and ask, "If I was old, mean, bitter and crazy what would I do?' 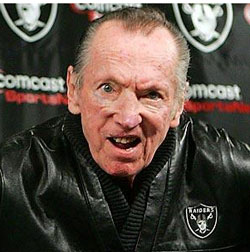 Thinking out of the box, I decided to draft a GM. Unfortunately there are none worth the #8 pick this year. That leaves only football players.

The Raiders and the Chiefs have had WAY too much in common recently. Both teams have been littered with starters who would be nice piece parts for the upper echelon NFL teams, if not practice squad guys. The KC and Oakland quarterback positions have been a mess (hopefully finally fixed for KC), and both O-Lines have been historically bad.

The biggest difference between KC and Oakland is that the KC faithful have only watched the catastrophe at Arrowhead for 3 years. Long suffering Raider fans are entering year 9. That's excellence.

After pouring over draft web sites and Raider blogs (followed by an immediate bleaching of the eyes), the general consensus is that Oakland's biggest need is QB. But Bradford is already gone to the Rams, and Al seems hell-bent on making Jamarcus Russell into a starter. Way to go Al.

That brings Oakland to their second biggest need, O-line. With the 8th pick in the 2010 AP Mock NFL draft, the Oakland Raiders select... 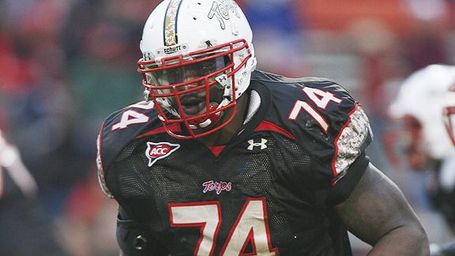 The Oakland line was atrocious last year. Not bad, atrocious. To really put it in perspective, you need to compare the Raiders to the Chiefs:

The KC line was considered one of the worst in the league. There isn't enough space on this post to link all the AP blogs, fanposts and fanshots screaming about just how bad the KC line was. Oakland's line was worse.

Oakland gave up more sacks than KC (Oak 49, KC 45). 4 of the sacks they allowed accounted for 18% of KC's underwhelming defensive sack total for 2009.

KC rushed for 228 more yards on the season than Oakland, despite Oakland's stable of RB's. Don't neglect the fact that till the Chiefs cut ties with LJ in week 8, the KC #1 RB only had 322 yards.

Some of the offensive line woes can be laid at the feet of Jamarcus Russell's play. Eventually Russell was pulled in favor of Gradkowski who showed flashes. Gradkowski's starter role lasted 3 games and one quarter before an over-matched right tackle was made to look foolish. No protection. Gradkowski goes down with an injury for the season.

Summary: Jamaal Charles is my hero. And the Oakland line is horrendous.

The Oakland Raiders best offensive lineman is draft bust reclamation project Robert Gallery at left guard. He has actually transitioned nicely to the interior line, but injuries plagued his 2009 campaign. He only played 6 games last year. He managed  back surgery, an appendectomy and a broken fibula all in one season. The back surgery was a major operation. Robert looks set to go for training camp as of now, but there is a lot of concern about Gallery's ability to stay healthy next season and beyond.

The  Left Tackle situation is meh. Last year the Raiders brought in Khalif Barnes from Jacksonville to steal the starting job from LT Mario Henderson . Didn't happen. Barnes battled injuries and never seriously threatened Henderson for the starting role. Henderson is considered an average LT whose play seemed to slide as the year progressed.

The Right Tackle situtation was also in flux during 2009. Last year's starter, Cornell Green was released  last week. Green was injured during the year and Khalif Barnes was asked to step in and start. It was such a disaster that Oakland pulled a Pioli and grabbed a player off the street and plugged him in. Barnes's replacement, Langston Walker didn't do terribly, but he didn't do well either. It's unclear whether he will return next season.

Right Guard seems to be set with Cooper Carlisle a blue collar road grader who is average to above average.

Center also seems set with Jake Grove, an average to above average center.

To make a long Greek tradgedy short, the Oakland O-line needs help on the at both Tackle positions, a viable alternative to Robert Gallery at LG and depth all along the line.

Campbell has Raider written all over him. I had the pleasure (to the displeasure of my wife) to watch the O-line workouts at the combine and Campbell was ridiculous. There's no way that someone that big should run that fast. He posted a 40 time in the high 4.7's / low 4.8 range.

His measurables are off the charts. 6'6", 314lbs, with a 36 1/4 wing span. Most O-line men look like they have every IHop for 500 miles programmed in their GPS, and Campbell is cut like friggin Atlas.

Most draftniks consider Campbell a reach at 8 which means he passes the "I know more than anyone else on earth" requirement for an Al Davis draft pick.

Campbell is coming out as a junior. He played in 27 collegiate games with just 17 starts. His junior year was plagued by injuries, and there are questions about his instincts and technique, especially in the run game. Still won't stop Al.

In the end I see this pick as a compromise between Cable and Al. Don't forget that Tom Cable was an offensive line coach for most of his career. Cable sees a raw talent that he can coach and Al sees a physical specimen that will help the Raiders win gold in the track and field events during the next summer Olympics.

For all of Al's draft debacles over the last few years you have to give him credit for targeting the greatest team need with his picks. And OT is definitely a need. I toyed with the idea of drafting Taylor Mays or Carlos Dunlap. Both players fit the Raider "Can he throw a car while running the 100 yard dash?" athletic requirements, but they aren't positions of dire need like the offensive tackle.

Trent Williams and Anthony Davis also don't make the cut. Williams doesn't have the measurables. Anthony Davis is looking to be this year's version of Andre Smith as maturity concerns have caused his value to drop significantly on most draft boards.

Bruce Campbell is the only prospect that is crazy enough to make sense.

In the end, you really can't blame Al for his insanity:

We all like to make fun of Al Davis these days. He just makes it so easy. But there is a reason why we love to hate him and it sure as hell isn't because the Raiders have been the worst franchise in football for the last 8 years. Chief's fans have hated the Raiders because they were an excellent team for 4 decades. And those teams were built on Davis's philosophy of better athletes make a better team. The Raiders were despised by the NFL, not only because they were dirty and arrogant. They were dirty, arrogant and winning football games.

A lot of people argue that the game has passed Al by, but 40 years of success is hard to put aside. You almost have to fell sorry for Oakland....naaaaaa

Note: Thanks to the fans over at Silver and Black Pride. The article titled "Raiders need OT in the mold of Bob "The Sledgehammer" Brown" was great, and the fan comments were some of the best breakdowns of O-Line prospects and OT intangibles I've seen on the web.