With The 3rd Pick In The 2010 Arrowhead Pride Mock Draft, The Tampa Bay Buccaneers Select...

Share All sharing options for: With The 3rd Pick In The 2010 Arrowhead Pride Mock Draft, The Tampa Bay Buccaneers Select...

Once upon a time, in the sunshine state, there lived a defensive unit that was considered one of the best of all time. Unfortunately, that defense has been dismantled. From the future hall of fame players, to the future hall of fame coaches, they have all departed and left the cupboard bare in Tampa Bay. In 2009, Tampa Bay's defense was ghastly to say the least. The two biggest areas of need are, the run defense, and the pass rushing. The Buccaneers tied for 26th in sacks during the 2009 season. To give you an idea of how awful that is, the discrepancy between 1st and 26th is 20; Minnesota logged 48 sacks, and Tampa bay with 28. If you thought a ranking of 26th was bad, the run defense was even worse; 32nd is what they ranked.

After the 08' season, the Buccaneers focused on offense during the offseason. They signed tight end Kellen Winslow and running back Derrick Ward. They also drafted quarterback Josh Freeman 17th overall in the 2009 draft. The defense was neglected and that played a huge part in their anemic performance in 2009. Fortunately for Tampa Bay, there are a number of guys who fill needs and are still available at the top of the draft. Names like Eric Berry and Dez Bryant will be seducing. Both fill major needs, and both are extremely talented athletes. Tampa Bay stays strong, and holds true to their draft board. 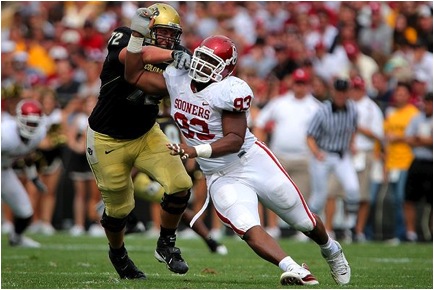 With the 3rd selection in the 2010 Draft, the Tampa Bay Buccaneers select defensive tackle, Gerald McCoy, Oklahoma University. Many analysts have defensive tackle Ndamukong Suh as the best defensive lineman in the draft but McCoy is the perfect fit for the Buccaneers scheme. McCoy is a 1-gap penetrator, and that is a requirement for a defensive tackle in the Tampa 2 Cover 2. During his collegiate career, McCoy lived in the oppositions backfield. With his violent hands, and high motor, he accumulated 14.5 sacks and 33 tackles for loss. McCoy has a multitude of pass rushing moves, which offers versatility to a defense. He is capable of playing inside or outside, in certain situations.

Not only does McCoy excel in rushing the passer, but he is also very stout against the run. He is an explosive tackler and often gets to running backs before they get started. His ability to gain leverage and stack and shed is what makes this defensive athlete so appealing. Many guys are one trick ponies, but that is not the case for Gerald McCoy. McCoy is also a high character individual who is a leader of men. He leads on the field, in the locker room, and off the field. A player of McCoy's stature is hard to come by, and he will be the face of the Buccaneers franchise for years to come.