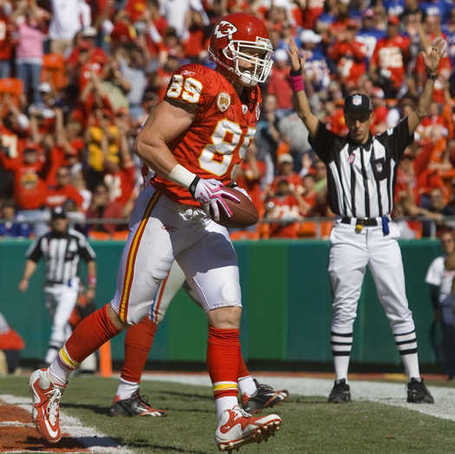 I know he's gone, but does it get more Irish than Sean Patrick Ryan?

Top o' the morning to you, Chiefs fans and a happy St. Patty's Day. Enjoy your Kansas City Chiefs news from across the internet. Be safe.

No other general manager in the league has turned in more contracts to the league office in the last two weeks than Scott Pioli. Denver has made nine moves for second spot in the AFC. Over in the NFC, Detroit and Washington also have made nine moves.

When it comes to signing new players, only Pittsburgh can match the Chiefs total of five. That alone is quite a surprise since the Steelers have never been known as a major player in free agency. Like the Chiefs, Pittsburgh has signed a lot of UFAs, but they haven’t been the big name types with big dollars attached to their move.

The Chiefs have made plenty of mistakes on players in recent seasons, and one of the biggest came six years ago when they let offensive lineman Ryan Lilja out of their grasp.

When they finally got another chance to acquire Lilja this week, they didn’t let history repeat itself. Lilja paid a visit to the Chiefs, and before it was over on Tuesday, he had put his name on a three-year contract worth $7.5 million.

Lilja, who played in high school at Shawnee Mission Northwest and in college at Kansas State, spent the last six seasons with the Colts. He started in all of those seasons except 2008, when he missed the entire year because of a knee injury.

Most of their recent free agent signings have the potential to make the Chiefs a better team.

Thomas Jones could, if he hasn't hit the wall that so many over-30 running backs do. Shaun Smith could, if he listens to and is motivated by Romeo Crennel. Jerheme Urban could, if he can catch the ball more consistently than Bobby Wade. Casey Wiegmann could, if he can play for the Chiefs as he did his first time around.

No coulds about Ryan Lilja, though. He will make the Chiefs a better team, period.

The Chiefs' best move from The Red Zone

Signed by the Chiefs as an undrafted free agent out of Kansas State in 2004, Lilja was picked up by the Colts one day after Kansas City cut him. The move was a major disappointment for the Chiefs, who had hoped that nobody would pick him up and he would then join Kansas City's practice squad.

Lilja brings plenty of big-game experience to a Kansas City team that finished its last two seasons with records of 2-14 and 4-12. He started eight playoff games for Indianapolis, including two Super Bowls.

The Chiefs haven't been to the playoffs since January 2007, when they lost to the Colts in the AFC wild card game.

Much of Kansas City's focus in previous drafts — especially with its top picks — has been on the defensive side, but its offensive line has been one of the team's most glaring weaknesses.

At least one former NFL coach believes that Larry Johnson will become the starting running back of the Washington Redskins.

Dick Vermeil, Johnson’s former coach with the Kansas City Chiefs, thinks that Clinton Portis’ days as the No. 1 running back on the Redskins depth chart are numbered.

"He will take over the running back position," Vermeil told the Washington Post about Johnson. "That’s what I think. He’ll push that guy right out of a job. Larry Johnson will work all week — he’ll work Wednesday, Thursday, Friday and Saturday — and he’ll make you start him on Sundays."

With Larry Johnson (and his NFL record 416-carry season) long gone, the emergence of Jamaal Charles and the signing of Thomas Jones, we have to ask the question – will the Chiefs now follow this trend? Will Charles and Jones share the load, neither approaching the 300-carry barrier, as Todd Haley seeks to replicate the success the Ravens, Saints and Cowboys found last season? There’s plenty of evidence that it’s coming.

First, we have to look at the history of general manager Scott Pioli. Consider that during his entire career in New England, the Patriots only handed the ball to a running back more than 300 times once – Corey Dillon, in 2004. Even with Dillon still on the team, the Patriots chose to employ him in tandem with Laurence Maroney. A year prior, the carries were split almost 50-50 between Antowain Smith and Kevin Faulk.

Former UL defensive end Hall Davis tweaked his left hamstring near the end of his final day at the NFL Scouting Combine two weeks ago in Indianapolis, leaving him unable to finish his workout.

Along with nine of his former teammates, Davis participated during UL's Pro Day on Tuesday in front of representatives from 24 NFL teams and the defensive line coaches from the St. Louis Rams, Cincinnati Bengals and New Orleans

Added Kansas City Chiefs linebacker Mike Vrabel, a member of the executive committee: "You prepare for it just like you prepare for a long and grueling season. We are preparing for the same thing with the lockout."

With players that convinced a lockout is coming, that tells you they don’t believe the 32 teams have any interest in sitting down at the bargaining table and getting something done. Players claim the owners are asking for 18 percent rollbacks on salaries. Owners say it’s not that much. Players say show us your books. There isn’t going to be movement on this issue any time soon. In the meantime, watch the rhetoric build.

Several players said Russell appears to be in much better shape than he was last season, when Russell's playing weight was listed at 260 pounds.

Russell spent the past month or so working out at a training facility in Arizona, according to director of squad development Willie Brown. Two players confirmed that Russell has been working out in the Phoenix area.

Brown said in an interview on Comcast Sports on Monday night that Russell was absent Monday so that he could complete the purchase of a home in Alabama.

GOOD IDEA, BUT THE CHIEFS AREN'T DEALING ANY HIGH PICKS. From Sam Johnson of Kansas City: "Greg Olsen wants out of Chicago. How 'bout the Chiefs? Since losing Tony Gonzalez, the Chiefs were awful at TE. Olsen would be a great fit while they're hunting down quality wideouts to complement him.''

Knowing Scott Pioli, he's dying for a crack at building his roster his way, with young, inexpensive players through the draft and through secondary free agency. I doubt he'd deal his high second-round pick for Olsen -- if the Bears decided to put him on the market at all.

almighty31 RT @PreciousSoHot #whenifirstmet @almighty31 he was on my plane drinking vodka and talked the entire flight to this ole lady I fell in love!

JoshLooney Chiefs and Colts might as well have just traded Alleman for Lilja straight up...same result, minus new contracts

ChiefsPR Can u spot all the #Chiefs on this list? http://www.nfl.com/draft/story?id=09000d5d816fb4f0&template=with-video-with-comments&confirm=true

Adam_Schefter I want this assignment one year. RT @espnmikes: Photo of pres Obama filling his bracket with andy katz: http://bit.ly/9v7BCS

Adam_Schefter We need to pitch this idea to @tunasweasel and espn bosses. RT @dgolfwood: You Just need to get Obama to fill out a 1st round mock draft.