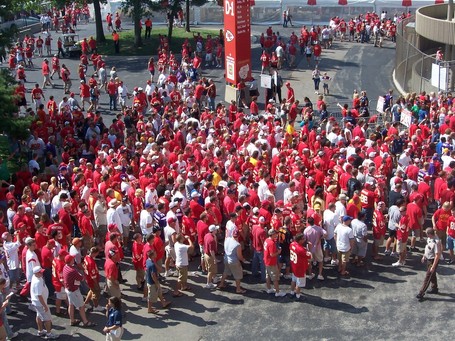 But that’s where the available players sit right now. There are a few players every day coming available; for instance, QB Chris Simms and S Deon Grant because available after they were released by the Broncos and Seahawks.

"We have to find a way," La Russa likes to say.

La Russa took some of that from Parcells' philosophy. When Parcells' daughter married now-Kansas City Chiefs general manager Scott Pioli, the best man was Indians GM Mark Shapiro, then the club's farm director. At the rehearsal dinner, Parcells asked Shapiro about the Indians, and Shapiro began his response with an explanation of a rash of injuries that had hit the team.

"Son," Parcells interrupted, "Let me tell you something. Nobody [cares]. Just win."

In the receiving line, when Parcells reached Shapiro, he said, "Remember what I told you. Nobody [cares]. Just win."

And when they found themselves in adjoining stalls in the men's room at the reception, Parcells repeated, "Son ..."

Gammons: Postcards from the road from MLB.com

THE Winnipeg Blue Bombers continue to flesh out their training camp roster, adding a pair of imports in wide receiver Will Franklin and linebacker SaMario Houston on Monday.

Franklin was drafted by the Kansas City Chiefs in the fourth round of the 2008 NFL draft and played in 13 games with the Chiefs that season making seven catches for 83 yards.

Blue Bombers load up at receiver, linebacker from The Winnipeg Free Press

MrKolbySmith Please believe it RT @QueenJerrica: @MrKolbySmith Hey! How are you doin? Off Season treating you ok?

MrKolbySmith The official after show party next weds @ lucky strike for the black eyed peas (beps). KC come on out for a great (cont) http://tl.gd/gvbv8

SI_PeterKing RT @bootang25: For Berry, KC would be logical to trade w/Mia. Might not cost what Jet/Brown deal did... And KC would never take S that high.