The last five years have been ugly for the St. Louis Rams.

Let's face it...when you haven't won 10 games since 2004, have won only six games in the last three years, and just came off the worst season in franchise history, your team is definitely in trouble. The fans are pissed. The team can't get sold. The high draft picks aren't turning it around. The games are a bore. This is a franchise that's not just in the toilet, but is firmly lodged in the septic tank.

Which brings us to the payoff for the worst season in franchise history...the top pick in the 2010 NFL Draft. Speculation is certainly rampant who they will choose because, let's face it, the Rams have made very few smart decisions the last several years and most of the time you can count on them to make the worst possible choice. But this is the year that it all changes...maybe. Because this year, the St. Louis Rams will be selecting... 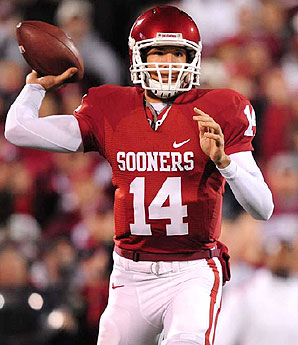 On draft day, a lot of pundits will end up scratching their heads at this one. After all, Bradford (who was considered the top NFL QB prospect last season, until returning to college for another year) is coming off a lost season in which he ended up suffering a major shoulder injury for an Oklahoma team that ultimately disappointed. There are questions about his post-surgery arm strength. There are questions about his durability. There are questions about his ability to adapt to a pro-style offense. And there are questions about the Rams' ability to evaluate quarterback talent. After all, this is a team that hung onto the carcass of Marc Bulger for far too long (after handing him a horrible long-term contract) and earlier this offseason expressed interest in trading for a largely ineffective Michael Vick. Many will say that if the Rams had to go QB, Jimmy Clausen should have been the selection over a guy who could end up being the next Chad Pennington (if he's lucky). And many will say that the Rams have blown yet another draft.

But there's reason for hope in the selection of Bradford. First, there's the offensive line. The Rams for the last few years, have followed what many consider the textbook method for turning a team around...building from the lines out. Left tackle Alex Barron and last year's number 2 overall selection, Jason Smith (who may be shifted to left tackle), give St. Louis solid bookends on their line. Last year's marquee free agent, center Jason Brown, is coming off a season in which he opened holes to help star running back Steven Jackson put up his second-best professional season. These three players create possibly the best scenario in which to throw a rookie quarterback...playing behind a solid offensive line with a running game to take off pressure. Surprising 2009 rookie Mark Sanchez survived and often thrived under such a set-up last season for the Jets...posting a season better than many expected despite limited experience as a starter in college. Bradford will be operating from a position as a three (actually, two and a half) year starter in which he posted outstanding numbers so he'll certainly have the tools to match if not surpass Sanchez's accomplishments. If there's a bad team out there that offers him the best chance to replicate his college success, ironically it's probably the Rams.

There are other reasons to believe that Bradford will thrive in such an offense. The Rams' coordinator, Pat Shurmur runs a West Coast style offense, which requires an accurate QB but not necessarily one with a cannon arm, a description that fits Bradford to a tee, and it requires a QB with intelligence, which Bradford's Wonderlic score (36) indicates that he is. Plus, Bradford has a winning pedigree...something the Rams are in desperate need of to shake the recent culture of losing in their organization. So assuming his recovery from shoulder surgery is complete, if there's a perfect fit out there for Bradford, the Rams would appear to be it. And, combined with the Rams' need to put a marketable, charismatic face on the franchise (something they won't get by selecting another lineman) all signs point to the first pick of the 2010 NFL draft being Oklahoma QB Sam Bradford.

Do you agree with the pick?