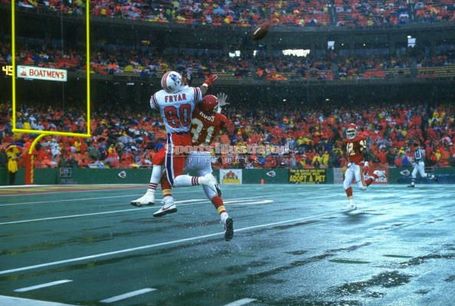 Good morning. This morning's picture is inspired by the flooding we've had here over the last 24 hours. The rain has finally let up a bit here and the creek behind my apartment is back in it's banks. Pretty crazy last niight. What that really means is decent weather for the St. Patty's day parade here. I fear much Guinness will perish. Anyway, here's today's dose of Kansas City Chiefs news from across the internet.

Aware that I have no control over the ongoing roster turnover, my way of satisfying an off-season craving consists of spotting the positions that I’d like to see get repaired/improved/replaced. Since one of the greatest lessons that I have learned from football resides in the premise that you have to trust your eyes, I applied the same judgment in writing these lines. Therefore, in commemoration of the first week of this latest adventure, I’m dropping those seven specific facets that, with luck and ability, will be really taken care of by the start of the upcoming season. Or so I hope.

Between them, they have 15 years of experience as player reps.

Delhomme agreed to terms on Saturday with the Browns, where he has a chance to winning the starting quarterback job for new football guru Mike Holmgren and head coach Eric Mangini. They’ve booted Derek Anderson to free agency and they are ready, willing and able to trade Brady Quinn. They picked up Seneca Wallace in a trade with the Seahawks.

Day No. 9 of Free Agency Update from Bob Gretz

After three long and frustrating years at the bottom of the league, this off-season is showing the Chiefs fan base that the Pioli/Haley brain trust is playing the free agent game like a couple of pros. Instead of tying up huge amounts of money to a single free agent like a Julius Peppers, the Chiefs are paying much less money for several players, giving the team necessary depth at key positions.

One player wasn’t going to transform the 2009 Chiefs into a playoff contender, but all these moves, combined with a good 2010 draft in April, could very well boost the Chiefs dramatically upwards in a weak AFC West.

A sad follow up to yesterday's Melvin Johnson article:

...Both made the jump to the NFL. Johnson played for the Philadelphia Eagles and the Kansas City Chiefs, and Myles spent two seasons with the Denver Broncos.

Johnson and Myles will forever be linked by more than athletics. They will always be linked by their untimely passings.

Friday marked the 30th anniversary of the passing of Johnson. He died away after slipping into a coma while having corrective surgery to repair a broken bone in his wrist.

In a strange twist of irony, the parish lost another great all-around athlete this week. Nearly 30 years after Johnson’s death, Myles passed away on Sunday after battling an illness that attacked various organs in his body.

Area Loses One of its Best from The Daily Comet

REUNITED: Defensive tackle Shaun Smith, who spent the final five weeks of last season with the Bengals, is back with Romeo Crennel, this time in Kansas City.

Smith had his two best seasons in the league when he played for Cleveland when Crennel was the coach.

Smith, who signed a one-year deal with the Chiefs, was an accomplished run defender with the Browns. He can play all three positions on the defensive line in a 3-4 alignment.

There were early indications that Smith was headed to Kansas City. Before making his visit, Smith had a Chiefs logo as the avatar on his Twitter account.

Is T.O. still in Bengals' picture? from Cincinnati.com

Going short with Twitter today. Either my account is all screwed up, or the time change jacked the site up. Almost everything showing is two days old. Oh well...