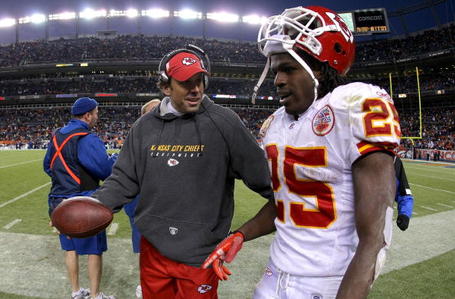 Good morning, AP! We're going tweet-free today. I need to get to the office early today. I can't begin to imagine what kind of work has piled up. Here's your Kansas City Chiefs news. Read and enjoy.

Defensive lineman Shaun Smith had the best seasons of his NFL career in 2007 and 2008 playing for the Cleveland Browns, who were then coached by Romeo Crennel.

The Chiefs, who agreed to terms of a one-year contract with Smith on Wednesday, are hoping Smith can play that way again next season as he’s reunited with Crennel. He was hired in January as the Chiefs’ defensive coordinator.

Smith has played in 63 games for New Orleans, Cleveland and Cincinnati, but has started just 27 times. He has 152 total tackles and two sacks, both of those coming in 2007 when he was with the Browns.

His most famous moment in the NFL wasn’t even on the field. It came in December of 2008 when he punched teammate QB Brady Quinn in the Browns weight room. That the Chiefs have gone ahead and signed him with Romeo Crennel – the former Cleveland head coach – as their defensive coordinator tells you something about what they think they can get out of Smith.

At least it gives them another player on the roster who has nose tackle size after veteran Ron Edwards.

In this current age of instant news and the 24-hour news cycle, it’s become a harder concept to live by and accept. Too much becomes known too fast about a moment in time. The standard of presuming innocence does not exist outside American courtroom in this 21st Century; it’s survival in jurisprudence can be debated as well.

It happens all the time. A person will be charged with some sort of crime or felonious behavior and it will become big headlines. A grand-jury indictment signals the perp walk that television loves, even though an indictment is not a finding of guilty or not guilty.

These days it seems more like guilty until proven innocent.

This civics lesson comes because of the latest incident that involves Pittsburgh QB Ben Roethlisberger. Big Ben is accused of sexual assault last week in Milledgeville, Georgia. A 20-year-old student at Georgia College and State University told authorities that Roethlisberger sexually assaulted her at in a women’s bathroom at nightclub near the college campus. Police at the scene interviewed Roethlisberger and members of his party and permitted them to leave.

Alabama LB Rolando McClain said on Tuesday the he suffers from Crohn’s Disease, an intestinal affliction that he controls with medication.

McClain made the announcement at the Alabama Pro-Day workout, where he ran the 40-yard dash (right) in 4.6 seconds, but then became ill when running other agility drills.

Whether this has an effect on how he’s viewed by teams – like the Chiefs – in next month’s NFL Draft remains to be seen. But McClain said he has dealt with Crohn’s since his freshman year in high school. If that’s the case, then it should not be a concern to teams because of how McClain played during his college career with the Crimson Tide.

I'm beginning to think Thomas Jones has never owned himself in a fantasy football league.

Why else would he choose to sign with the Kansas City Chiefs?

This is truly a nuclear option for Jones' fantasy value. He goes from running behind one of the NFL's best offensive lines to one of its worst. He goes from being a clear starting halfback to being a clear backup, behind 2009 second-half sensation Jamaal Charles. And he goes from playing for a conservative play-calling administration in New York to Todd Haley, a guy who, if he had his druthers (i.e., if his offensive line could pass block), would throw a bunch more.

Jones loses lots of value with Chiefs from ESPN

The Chiefs are hopeful running back Thomas Jones can do for them what he did for the Jets and Bears: help them become winners.

"He’s a good football player and a strong leader, a real professional," Chiefs coach Todd Haley told the Kansas City Star. "He’s been part of turnarounds at a couple different places, in Chicago and New York, where he kind of got teams to the promised land, so to speak. He’s a strong character and he loves football, so he fits that bill of what we’re looking for here."

That wasn't enough for the AFC runner-up Jets to keep Jones at a cost of $5.8 million. But the 4-12 Chiefs felt the 31-year-old, who went to the Super Bowl with the Bears, was a missing ingredient.

"That’s part of being a good coach,’" Haley said. "I don’t think you can have enough good football players who want to win and want to be part of something special. Thomas fits that bill."

Football season is upon us once again here in Maryville. With the start of Spring practice and Northwest’s Pro Day, football fever is here again.

The Kansas City Chiefs sent two scouts to Northwest to watch six Northwest seniors, and a few other players from MIAA schools, work out in hopes of finding a late round gem or undrafted free agent.

"First of all, it gives our seniors that have graduated an opportunity to showcase what they can do," head coach Mel Tjeerdsma said. "I think it’s nice that it’s here because they feel comfortable here. I think it’s good that our younger kids see that. Half of our team was down there watching them run 40s. It lights a little fire under them; maybe in a couple years I’ll have the opportunity. I think that’s where we’re at with our program right now."

Day of Reckoning from The Northwest Missourian