Share All sharing options for: Former Chiefs WR Samie Parker Living In The Past With Hard Knocks 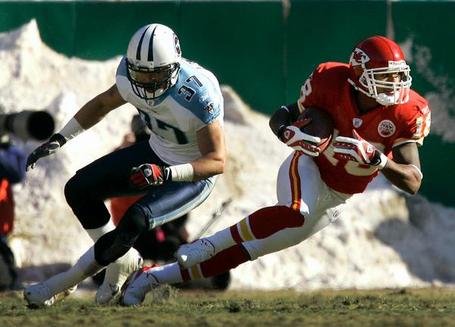 Here's a blast from the past: Samie Parker, Herm Edwards and HBO's Hard Knocks.

Parker has taken to Twitter to relive some memories of the 2007 rendition of HBO's Hard Knocks in which a  camera crew followed the Kansas City Chiefs during training camp.

Back to tha house bout to watch a old episode of Hard Knocks with Kansas City Chiefs they did my boy Casey Printers wrong having him make "chicken scratch out of chicken shit!!"

Ah, arguably the best line of that season of Hard Knocks. Ray Farmer, personnel man for the Chiefs, was in charge of letting players know when they're being released. Farmer called former Chiefs quarterback Casey Printers into the room and informed him his time as a Chief was coming to an end. That brought the famous 'How am I supposed to make chicken salad out of chicken shit?'

Going further into the episode, Parker had this to say:

How would Herm Edwards know the 1st order of business after winning a Super Bowl he aint never won 1.. They might as well as me how my season was n the NFL this year

Hard for Parker to criticize Edwards from the UFL....I wonder if he did his trademark "First Down!" symbol even when his team was down three scores?