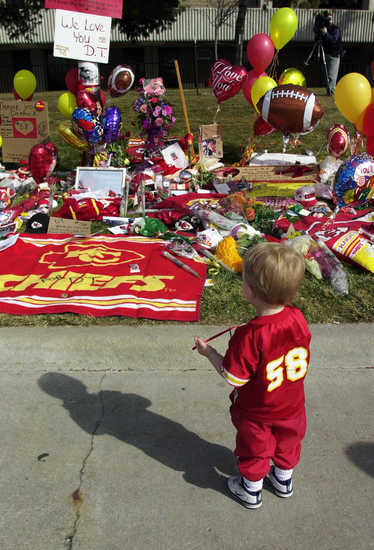 Good Morning AP. As you know, yesterday was the 10th anniversary of the death of Derrick Thomas. We're starting by posting a couple of articles written about that loss from 10 years ago today. The first one is from Mr. Whitlock.

Derrick Thomas, the soul of the Chiefs for 11 years, left us Tuesday morning. Complications from his single-car accident on Jan. 23 caused his death.

We never had time or the opportunity to thank Derrick properly.

Whitlock in 2000: We never got the chance to say thank you from KC Star

People wander in and out of Jackson Memorial Hospital now, some crying, some laughing, some trying hard to look brave. Newcomers drift through the halls aimlessly. Regulars walk with purpose, like police officers on the beat. A few hours have gone by since Derrick Thomas died so suddenly. Night falls. Rain drizzles. The hospital goes on. The hospital always goes on.

Derrick Thomas was just one man in this gigantic assembly of hospital buildings. Just one story. In the various children's wards at Jackson Memorial — the kinds of places that Derrick so often visited during his life — little kids deal with the most terrible kinds of pain: cancer, leukemia, paralysis, cystic fibrosis. Across a half-dozen halls, across parking lots, people cling to their last days. Babies are born. People die young. Rape victims try to put their lives back together. Doctors massage human hearts, trying to make them pump again.

Yes, in every building, they all have stories.

Posnanski in 2000: Father's spirit was his guide throughout life from KC Star

In the last two NFL regular seasons, there have been 101 onside kicks.

Only 24 were recovered by the kicking team.

Those odds were well known to Sean Payton. It didn’t slow him down and his willingness to fight the odds created one of the most talked about moments in Super Bowl history.

Down 10-6 at the end of the first half, Payton walked to the New Orleans Saints locker room and knew something had to give if his team was going to have a chance to win Super Bowl XLIV. All week, Payton and his coaching staff had talked about being aggressive, no matter what the scoreboard read or the game situation.

Before he even entered the locker room, Payton had made up his mind that on the opening kickoff of the second half, he was going to go against the odds and run an onside kick. It was a decision that would make him a genius or an idiot; there would be no place to land between those options.

On the biggest stage the game of football can provide, he went against the odds.

A Look Back at No. 44 … Tuesday Cup O’Chiefs from Bob Gretz

For the fifth time in franchise history, a Kansas City Chiefs player has won the NFL Man of the Year award. The league honored Brian Waters at the Super Bowl for his contributions to the community.

It may be as simple as hosting a pizza party, giving away Chiefs tickets or providing a personal tour of Arrowhead Stadium. By giving his time and attention, Waters is helping change lives.

It was a day Audra Harrison and her family will never forget. Her nine-year-old son, Brock, is a huge Chiefs fan. But because Brock is autistic, Audra said the family never considered seeing a game in person because of all of the planning it would require.

That was until Brian Waters' 54 Foundation and the Fox 4 Love Fund made it all happen.

Brian Waters Celebrated For Contributions To Kansas City from Fox4KC

...He coached in the National Football League for the Kansas City Chiefs (1983-86), Tampa Bay Buccaneers (1987-89) and New York Jets (2004).  Graber coached six NFL All-Pro defensive backs with the Chiefs and served as Tampa Bay's defensive coordinator in 1988 when the team led the NFL in rushing defense.  He compiled a 68-58-3 overall head coaching record at the high school, college and professional level.

Reshard Langford, a first-year free safety with the Kansas City Chiefs, said he first heard about the concert from his agent, then found out by talking to other players that this was the faith-filled hot spot for the Friday preceding the Super Bowl.

"I know how I got here and I know who to praise, that's why I want to be here," Langford said.

He said he was especially excited about singing in his first players' choir, having attended singing practices on Thursday and Friday. "I know I'm not one of the best singers," he admitted, "so they keep me in the back."

almighty31 u know u the baddest

JarradPage44 Jus left 24hr fitness. Wrkout was a beast!! I didn't know the stairmaster had a level 11. Lol #nowplaying nipsey hussle - we bang we ball

almighty31 Bout to take a drive.

WhitlockJason http://bit.ly/b2yUZv Colts greeted by 11 fans upon their return. Anyone still want to defend the decision to quit on history?

SAMIEPARKER: Back to tha house bout to watch a old episode of Hard Knocks with Kansas City Chiefs they did my boy Casey (cont) http://tl.gd/7s2hp

Noah4011: other than the pats, the team i&apos;m most excited to watch next year is the Chiefs. Curious to see how this reunion of ex-pats goes.

MrTaylorA: (Chiefs 125:1) Superbowl XLV in Dallas, where the Chiefs used to be the Texans. I like the karma odds... Maybe they meet the Cowboys?

mighty_jeff: I just thought of something... Kansas City needs to be devastated by a tornado so the Chiefs can finally win a Super Bowl.

tdogmediablog: 10 years ago: Bob Collins, Doug Henning, Derrick Thomas (of KC Chiefs), Charles Schulz and Tom Landry all died within 5 days of each other.