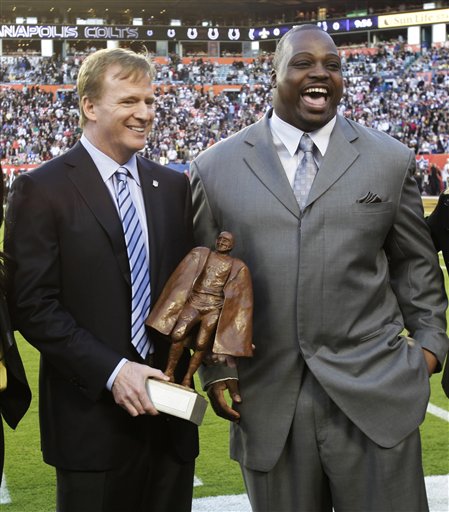 Good morning AP. Congrats to the Saints on their win last night. As you can imagine there are not a lot of Chiefs stories out there today. Here's what I could find. Also, all of the Brian Waters stories I could find are just rehashes of what we've already posted.

Linebacker Scott Fujita said this over and over again after the New Orleans Saints surprising 31-17 victory over the Indianapolis Colts to win Super Bowl XLIV at Sun Life Stadium.

It was a theme repeated time after time by the victorious Saints. It was something that was talked about during the days leading up to championship Sunday. There was a tangible sense of the power of belief and this football team believes a Super Bowl victory was their destiny.

"We never doubted we were going to win," Fujita said. "We felt that back on Tuesday when we first walked into this stadium. There was just never a doubt because we were playing not just for ourselves, not just for each other, but for an entire city and region. All we wanted to do was give New Orleans a championship.

First, Sabol points to the result: Kansas City squashing 13-point favorite Minnesota, 23-7. The Chiefs dispelled notions of the AFL being a finesse league by knocking tough Vikings quarterback  Joe Kapp  out of the game.

A ban on the three-point stance? NFL commissioner Roger Goodell says it's possible.

Concerned about concussions, Goodell said Sunday he league will keep looking for ways to make the game safer. Speaking on CBS's "Face the Nation" hours before the Super Bowl, he didn't rule out the idea of banning the three-point stance for linemen to reduce the ferocity of collisions at the line of scrimmage.

While science is still trying to determine the long-term effects of concussions, Goodell said, the league has made progress in increasing awareness about the severity of such injuries.

JarradPage44 I dunno. Saints D is gettin SHREDDED!! If they don't score here. It could get ugly

JarradPage44 Got a game folks. This is what I wanted to c

JarradPage44 IT'S A WRAP!!! CONGRATS SAINTS

WhitlockJason I wonder what NOW thinks of Go Daddy commercial with Danica.

JPosnanski Wife sending me updates on commercials -- she said there was one on with a beaver playing a violin. Even here, I'm confused.

JoshLooney Back to back pantless commercials...

JPosnanski I don't know that I have ever, in my entire sportswriting life, been more surprised than I was by that Peyton Manning interception.

JoshLooney Lenny goes through the guantlet without a fumble...great to see him honored

JPosnanski That was really cool watching Len Dawson walk through the entire Saints team while holding the Super Bowl Trophy.

JPosnanski Several KC people wonder why Dawson didn't make a run for it with Super Bowl trophy since that's the Chiefs best shot at one.