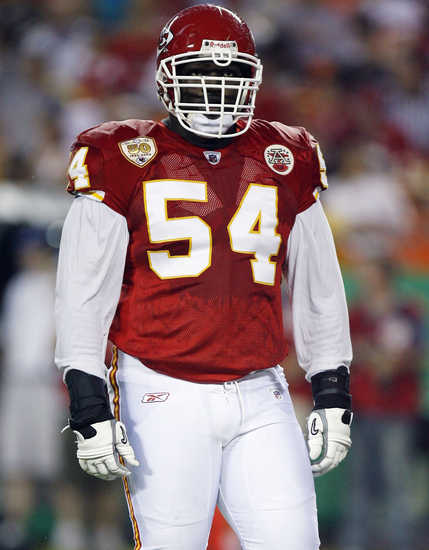 Here's your Super Bowl edition on Arowheadlines. Your Kansas City Chiefs news is gathered from across the internet four your enjoyment. First and foremost. a big shout out to Brian Waters, the 5th Kansas City Chief to be named NFL Man of the Year.

Last Sunday, the lone Kansas City representative on the field at Sun Financial Stadium for the Pro Bowl was K.C. Wolf.

Things will be different this Sunday for Super Bowl XLIV.

First of all, Kansas City’s Sultan of Sod George Toma has worked the playing surface and it’s ready to go for the championship game between the Indianapolis Colts and New Orleans Saints. In the post-game ceremonies, Chiefs Hall of Fame QB Len Dawson will deliver the Vince Lombardi Trophy to NFL Commissioner Roger Goodell to hand over to the winning team.

And in pre-game ceremonies, current Chiefs G Brian Waters will be presented with the Walter Payton NFL Man of the Year Award for the 2009 season.

Waters is the fifth Chiefs player to win the honor, and that’s more than any team in the league. He follows linebacker Willie Lanier (1972), quarterback Len Dawson (1973), linebacker Derrick Thomas (1993) and guard Will Shields (2003).

"If you came to play there," Lanier says of Kansas City, "that was only part of your mission. If you didn’t recognize there was a larger mission outside the lines than just playing the game on Sunday, you didn’t fulfill what your expectations were."

Following in impressive footsteps, Waters has shared his time and riches with thousands of children. He’s done it in the Kansas City area and in his native Waxahachie, Texas, the small town south of Dallas where Waters learned years ago that gifts are given but also can be taken away. He learned then that success is a delicate thing, and Waters came close once to allowing his short temper to derail a promising future.

The Pro Football Hall of Fame Class of 2010 includes the leading receiver and rusher in NFL history. The group includes a Hog and a guy who painted his face before most games.

WR Jerry Rice and RB Emmitt Smith led the full class of seven new members that was decided during a seven-hour meeting of the Hall’s Board of Selectors on Saturday at the Ft. Lauderdale Convention Center.

The discussion involving Rice and Smith lasted a combined 10 seconds, as they were mortal locks.

The rest of the meeting was filled with lively debate on the other 15 names in front of the group, as the 44 voting members struggled with cutting the field to the maximum seven inductees.

The Hall Of Fame Class of 2010 from Bob Gretz

The Pro Football Hall of Fame is becoming a bad joke. Shannon Sharpe won two Super Bowls in Denver and was the key addition that allowed Ray Lewis and the Baltimore Ravens defense to win a Super Bowl. Sharpe retired as the most prolific pass-catching tight end of all time.

Next year, Deion Sanders, Willie Roaf and Marshall Faulk will be on the ballot. They are no-brainers. Jerome Bettis and Curtis Martin have first-ballot resumes. The maximum allowed in is five modern players and two senior inductees. In other words, at least three modern players — Bettis, Martin, Sharpe, Carter or Brown — are going to be disappointed again.

Process for voting on football hall is broken from KC Star

Tonight, Len Dawson will be in the Super Bowl spotlight again.

Dawson, the Chiefs Hall of Fame quarterback, will hand the Vince Lombardi Trophy to the winners of Super Bowl XLIV — 40 years after he and his Kansas City teammates helped spark the transformation of this game from curiosity to national holiday.

"To think we were part of that and what jump-started what this is all about today…" reflected Dawson, the game’s MVP when the Chiefs shocked heavily favored Minnesota 23-7 on Jan. 11, 1970, in New Orleans.

"No one would have dreamed in those days it would be this kind of spectacle."

It began innocently enough, in mid-January of 1967, under a soothing Southern California sun, and in front of acres of empty seats. The old established franchise, the Green Bay Packers, and the chesty young upstart Kansas City Chiefs engaged in a professional football game that was pretty much ignored by most of America.

Few had even an inkling of the monster it would evolve into: The Super Bowl is our Circus Maximus, complete with Roman numerals in a transparent effort to anoint it with self-importance. (Hence, this is Game No. XLIV, rather than plain 'ol unpretentious 44.)

Our monument to wretched excess.

The busiest, and richest, day of the year for the bookies.

More food is eaten than on any other day of the year, save Thanksgiving.

It began as just another game, then swelled into a day, then bloated into a week.

It began as a game with virtually no audience and now draws just more than 100 million viewers worldwide.

It began as a game that had to beg for TV time and now asks, and gets, $3 million for a 30-second commercial. This is debut day for advertising agencies, who load up with their best creative stuff, knowing the really clever ones will be talked about almost as much as the game itself.

This game's no passing fancy from The Philadelphia Inquirer

JarradPage44 Hey y'all J Page ain't about to be ANYWHERE in Miami regardless of what u heard on the radio!!

bestyle @ArrowheadPride I hope Al Davis lives to be 100 years old and runs the Raiders the whole time.

FarragoJerid: Looking forward to watching #SB44 tomorrow. Don't really care who wins...I like both teams ok...just wish it were my Chiefs.

mospeedatty: Congratulations to Brian Waters on the Walter Peyton Man of the Year award. #chiefs

WhitWhit_DubC: Fk u tony g for saying the fans in the south are crazy... Chiefs fans are nuts u unappreciative bastard. I no longer wanna do u prick..

austbiker: Is gonna phsyc myself up for the superbowl later. I wonder if the chiefs will ever go there in my lifetime?