Share All sharing options for: Hall of Fame RB Tony Dorsett On the Value of a One-Back System 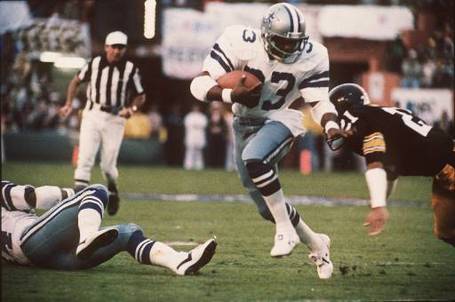 I had the opportunity to talk with Hall of Fame running back Tony Dorsett this afternoon about a variety of topics. One portion that I wanted to share was particularly relevant to the Kansas City Chiefs.

The one-back vs. two-back system.

Parts of the interview can be seen at SBNation.com and the one-back/two-back stuff can be seen after the jump.

A lot of the talk surrounding the Senior Bowl and the rest of the NFL Draft has been about acquiring a "big back" to complement Jamaal Charles. This is the trend that we've been seeing in the NFL and it makes sense for a lot of reasons.

However, in my conversation with Dorsett, he said that's not the way he would've wanted to do things. I specifically cited Larry Johnson when talking about the longevity (or lack thereof) of running backs today.

"I'm not a big believer in [the two-back system]. You pick a guy and go with it. You get somebody to back him up just in case he gets hurt. That's not bad to have - trust me. When a guy goes down you gotta have somebody that's comparable to him waiting in the wings ready to go."

He indicated that the two-back system would be difficult on a running back like, for example, Charles.

"Just doing that sparingly, in and out," he said, "you may get lucky and hit some big plays but that's not going to happen all the time."

Busy day at the Super Bowl. I'll be back soon with Rich Gannon talking about his time with the Chiefs and Raiders.

Thanks to the folks from YesterYear Fantasy Sports for getting me in touch with Mr. Dorsett.