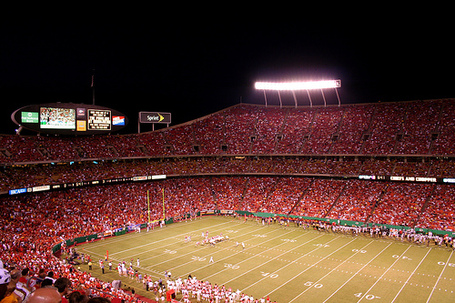 Morning AP. Had to go AWOL for a bit. Life blew up, but has settles back to mostly normal. Thanks to the the powers that be for covering this post while I was out. Now your Kansas City Chiefs news.

The Kansas City Chiefs have extended a multi-year radio partnership with 101 The Fox (KCFX-FM) on Wednesday. For the 21st consecutive season, 101 The Fox will proudly serve as the flagship station of the Chiefs Fox Football Radio Network in 2010.

This innovative new agreement between the Chiefs, 101 The Fox and Sports Radio 810 will give Chiefs fans more coverage of Kansas City’s hometown team than ever before. With more exclusive interviews, expanded programming and some of the most authoritative analysis in the league over the course of the entire game week, Chiefs fans will enjoy wall-to-wall radio coverage on both the FM and AM frequencies for years to come.

Purdum’s name was put in the Jets’ ear by someone Kansas City Chiefs fans may be familiar with: former Chiefs punter Louis Aguilar.

Along with substitute teaching, Purdum was continuing to train and look for coaching jobs. He had also planned on traveling to Las Vegas to participate in Aguilar’s pro combine.

"I do a lot of work with (Aguilar) and help him coach some high school camps in the area of Blue Springs and other places," Purdum said. "The (Jets’) player personnel director ... had just called Louis and said he was just trying out a few kickers and wanted to know if he had any snappers, and Louis gave him my name and he got in contact with me and went from there."

Last year Purdum worked out with the Green Bay Packers and was with the Kansas City Chiefs through last spring, summer and into the fall camp before getting released two days before the Chiefs’ first preseason game.

For all of the deft moves Fujita displays on Sundays, the best one he ever made came nearly four years ago when, on the first day of free agency, he made up his mind to sign with the Saints following a free-agent visit. On paper, it made no sense – Fujita, who spent a year with the Dallas Cowboys after three relatively successful seasons with the Kansas City Chiefs, was committing to a franchise coming off a 3-13 season and moving to a city ravaged by the aftermath of Hurricane Katrina.

Yet he and Jacyln saw opportunity. "We sensed there was potential to do something that was much bigger than football," Fujita recalled. "I’ll never forget the conversation we had that night in our hotel room. We were whispering – Jacyln’s a bit of conspiracy theorist and was convinced the room was bugged – and we said, ‘This is it.’ "

So Fujita canceled free-agent visits with the Jaguars, Eagles and Raiders and became the first player to sign after coach Sean Payton’s arrival – two days before quarterback Drew Brees(notes) came aboard.

While "groundbreaking" might be not be an inaccurate choice of words for this alliance, there is little doubt that this three-way is kinky. It appears 101 The Fox gets to keep their exclusive radio rights for the Chiefs broadcasts and 810 gets to broadcast everything that isn’t the Chiefs play-by-play and network pre- and immediate postgame. In other words – 810 gets to carry all the stuff no one listens to anymore. Read on.

OTC: 810 Is The Chiefs New Bob Gretz from KC Confidential

almighty31 gotta work off this pizza. another 500 abs

MrKolbySmith Just got challenged to a race on the elliptical. Lol

Adam_Schefter Get the Purell ready. A stomach virus/flu bug is sweeping through the NFL main's hotel in Ft. Lauderdale.