Greetings From the 2010 NFL Combine

Share All sharing options for: Greetings From the 2010 NFL Combine 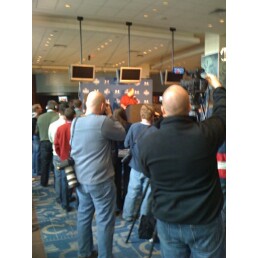 Greetings to all AP readers from Lucas Oil Stadium in downtown Indianapolis - site of the 2010 NFL Scouting Combine. Over the next several days, we'll be reporting live as any Chiefs news (or other news of interest, for that matter) rolls in concerning the Chiefs roster decisions, upcoming NFL draft, free agent movement and much more.

It's back-to-back-to-back (and on and on) news conferences at several podiums set-up in the media area from head coaches, draft eligible players, general managers, agents and much more. Elsewhere in the stadium, various players are being brought in throughout each day for full physical exams, measurements, interviews with prospective teams and the famed workouts you often read about involving 40-yard-dashes, bench presses and other drills.

Today features four positions, two of which are little interest to Chiefs personnel I'm sure. Offensive linemen and tight ends make their way here today, along with punters and kickers. With the Chiefs quite set in the special teams positions, it's a key time where Scott Pioli and company can focus on strengthening their offensive line and getting to know some of the guys at one position only. Perhaps some other attention will be paid to tight ends, but, as has been noted here before, Todd Haley doesn't seem quite fond of utilizing tight ends to great effect -- at least not in any offensive statistical sense.

I'll be weighing in throughout the day with updates on things I'm hearing, but it's definitely different than expected here in the media section. There's 300+ media members from what I hear all clamoring for a couple guys available at a time -- picture feeding time in a fish aquarium. Still the buzz is strong and no one quite knows what to think of the NFL labor situation, the uncapped year or how things will fall in the upcoming draft -- even with the top pick.