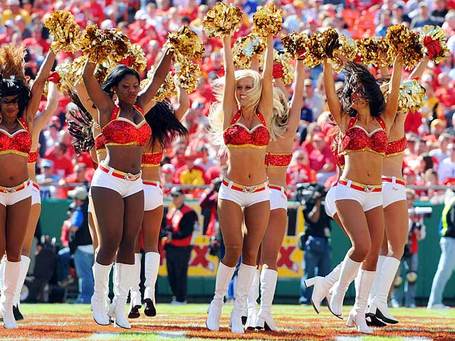 Wow. You know it's rough when neither Bob Gretz nor the Kansas City Star has a new story on our Chiefs. With that being said, there a re a couple of stories not yet posted. Here's what I could find, your Kansas City Chiefs news.

You could say Cunningham’s recent comments are the "right fit" for how some in Kansas City view Pioli and Todd Haley. Last year’s draft wasn’t all Pioli was cracked up to be, a real yawner, and decisions – when it came to who they let go compared to who they kept – were questionable. Trading a younger Bernard Pollard and keeping Mike Brown got the chat rolling.

I’m a visual person, so picture it like this, an Old West feel with fans on the fence, hats tipped back, arms crossed with a wait-and-see look on their face.

One response I’ve heard quite a lot of after the Chiefs finalized their 2010 staff was "no more excuses." Fans are looking for players to come to Kansas City and they expect real fruit from this year’s draft.

The annual SBN Sports Black College All-American Awards (BCAA) weekend took place on Friday, 2/12 and Saturday, 2/13 in Orlando.  Celebrating its 36th anniversary, the weekend of activities, culminated in an awards luncheon recognizing the top football student-athletes from the nation's Historically Black Colleges and Universities (HBCUs).  It also celebrated the accomplishments recent BCAA honorees continue to have on and off the field...

...I cannot say enough about young pros like Jacoby Jones of the Houston Texans, Marcus Benard of the Cleveland Browns, Javarris Williams of the Kansas City Chiefs and Dominique Rodgers-Cromartie who came back to share with the All-Americans what their early years have been like in the NFL.

Branden Albert, tackle, Kansas City: Albert will likely be switching positions soon. This is a big development for Albert and for the Chiefs. Albert, who was taken at No.15 in the 2008 draft, has played left tackle both of his seasons in the NFL. He has been slow to develop. Kansas City may use the No. 5 overall pick on a left tackle. That would enable Albert to move to right tackle. Several NFL scouts believe Albert will be a more effective right tackle than a left tackle.

Keep an Eye on these 10 Players from ESPN

Reminds me of: Derrick Johnson, LB Kansas City Chiefs-Both guys were these hyper-aggressive college linebackers who used their athleticism to get around blockers rather than through them.  Both guys have a tendency to make a big play, and miss out on the simple ones.  In the right scheme Johnson can be a star and I think the same hold true for Washington

It's a wild place out there in the current free agency realm , but somebody has to make sense of it.

There are more capable running backs available on the market than you'd think, and with Jamal Lewis added to the mix (unless he retires), the field just got a little fatter.

Now, that doesn't mean we consider Lewis to be a potential "asset," but after looking at how weak the quarterback pool is, you'll understand that any amount of talent at any other position will have NFL GM's salivating.