The Greatest Kansas City Chiefs, By the Numbers: #49

Share All sharing options for: The Greatest Kansas City Chiefs, By the Numbers: #49

I think we've got our first shoe in a couple of weeks for the Greatest Chiefs. When you think of #49 wearing the Red and Gold, you think of Tony Richardson, right?

I fill you in on Tony Richardson and every other Chief to wear #49 after the jump.....

Bograkus didn't play in any regular season games for the Chiefs. He came to KC during the 1976 preseason and got got on August 24th. He didn't play for any other NFL team.

Another freakin' KU grad! Gay played in two games for the Chiefs in his only NFL action. He was a wide receiver turned defensive back. Since the Chiefs were packed to the brim in '94 with stars at WR like Lake Dawson, Michael Stephens and Lee Harris, Gay was turned into a short defensive back.

A 10th round pick out of Mississippi State, Jackson played in all 16 games of the '79 season as a backup safety. He had one pick and one fumble.

Nelson was a college free agent in '87 and played as a sub for the Chiefs during the 1987 NFL strike. He registered no significant stats. 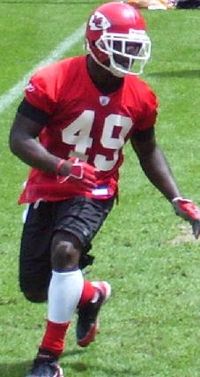 The vast majority of you are familiar with Bernard Pollard. He was a second round pick out of Purdue in 2006 and played in 16 games as a backup strong safety during his rookie season. Pollard went on to start all but one of the next 32 games for the Chiefs at strong safety.

He had three picks and five forced fumbles as a Chief. He was released in September 2009 and subsequently picked up by the Texans. 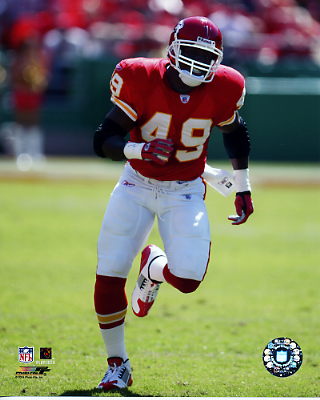 If you know what's good for you, you'll vote for Tony Richardson.

Richardson was an integral part of the dominating rushing attack the Chiefs had during nearly his entire tenure in KC. Richardson's best scoring year was in 2001, when he had 7 rushing touchdowns. His best yardage season was the year before when he had 697 yards rushing.

The Chiefs let Richardson go in 2006. He left for Minnesota and made the Pro Bowl in his second year there, which was his third Pro Bowl appearance.

Always classy and under appreciated, Tony Richardson should win this poll.

Thomas played in one NFL season, mostly as a punt returner. For the Chiefs, Thomas returned 12 punts and 22 kickoffs. He didn't take one back to the house but alright 9.3 and 23.5 yard return averages.

Who is the greatest Chief to wear #49?

Who is the greatest Chief to wear #49?