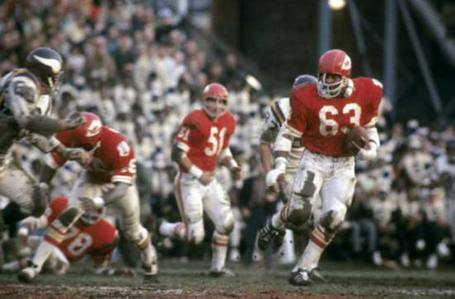 Happy Thursday AP. Here's your Kansas City Chiefs news from last night. We're going tweet-free today so I can catch the express train into the city today. Long day of meetings, but I'll be sure to balance it out with some drinking at a few bars before I take the train home. Enjoy.

The Chiefs are used to having a wide selection of players to choose from which to choose. This is the third straight year they’ve had a top-five pick.

The Chiefs would like their top pick to have more instant impact than either of their last two top choices, defensive linemen Glenn Dorsey and Tyson Jackson. Dorsey played better last season than he did as a rookie in 2008 but still has a long way to go before he’s the player the Chiefs expected he would become.

Jackson, a rookie last year, similarly is trying to establish himself.

Berry might have the best chance of giving the Chiefs that instant impact among players they could consider in the first round. Florida’s Joe Haden is considered the top available cornerback but the Chiefs already have Brandon Flowers and Brandon Carr.

Led by the kicking duo of Dustin Colquitt (right) and Ryan Succop, the Chiefs finished 12th in the league when it came to the kicking game according to the rankings of Dallas Morning News football writer Rick Gosselin. Our man Goose and his rankings based on 22 kicking-game categories have become the gold standard around the NFL for evaluating each team’s units...

It’s not likely to happen. Still, the tie between Charlie Weis and his former Notre Dame quarterback Jimmy Clausen, is a strong one. It’s strong enough that it’s fair to raise the question: Would the Chiefs, with Weis now running their offense, draft Clausen?

ESPN draft analyst Mel Kiper raised the question himself today when I asked him about the players the Chiefs might reasonably consider (more on this later in the Kansas City Star and on kansascity.com) with their top draft pick, which is fifth.

It’s worth considering but . . . from The Red Zone

Four members of the Kansas City Chiefs are among 77 current and former NFL players attending the NFL Business Management and Entrepreneurial Program at Harvard Business School and the Wharton School of the University of Pennsylvania this week.

For football fans under 50, used to seeing blacks at every position on the field, here's a fact that suggests what sports used to be like:

Willie Lanier, whose career with the Kansas City Chiefs began in 1967, was the first African-American middle linebacker in pro football. Until then, it was commonly accepted that blacks lacked "the necessities,'' a word once used about them in baseball, to play in the middle of the field. It obviously applied to quarterback, but also to guards, centers and the MLB position that serves as quarterback of the defense.

Lanier -- who grew up in segregated Richmond, but went to college in Baltimore because he felt that the north was more tolerant racially in those years -- changed that.

There will be names -- and some big names -- out there that may dazzle you and your friends, but here's hoping your favorite NFL teams aren't as starstruck. It's buyer-beware season, and I have 10 prospective free agents -- unrestricted free agents only -- I would not sign.

The Tennessee Titans appear to be in strong negotiations with guard Eugene Amano, but could be without one of their best lineman next season. According to Tennessean Titans Pro Bowl center Kevin Mawae is going to test the free agent market this offseason. Mawae has spent the last four seasons with the Titans, and is coming off his eighth Pro Bowl this past season.

It doesn’t seem likely that Mawae will be back with the Titans next season, as the team already has a lot invested up front, and Mawae is definitely at the end of his career at age 39. The loss of Mawae leaves a big hole in the middle of the offensive line, and its likely the team will either replace him with backup Leroy Harris or slide Amano over from guard.

In pair of amendments, the Kansas City Republican proposed stripping from the state budget a $2 million subsidy for Bartle Hill, and then applying that $2 million to the Jackson County Sports Authority, which maintains Arrowhead and Kauffman Stadiums.

The move comes in response to a decision from Funkhouser to cut the city's $2 million subsidy to the stadiums.

Silvey to Funkhouser: Give $2M to the stadiums or lose $2M from Bartle Hall from Prime Buzz