The Greatest Kansas City Chiefs, By the Numbers: #48

Share All sharing options for: The Greatest Kansas City Chiefs, By the Numbers: #48

Got another barn burner of a Greatest Chiefs for you this morning. Todd McNair and Thomas Gafford are probably the only guys a lot of you recognize on this list.

That's not going to stop me from delivering one-liners about the rest though.

Impress your friends with your Chiefs knowledge after checking out what's after the jump...

Coming out of Texas Southern, Allen was selected in the 11th round of the 1971 NFL draft. He would play four seasons for the Chiefs as a backup corner back, snagging three interceptions and playing in 108 games.

Burgmeier was a 5th round pick out of Notre Dame by the Dolphins but managed to make the Chiefs roster in 1978 instead. He played in eight games and started two at safety.

Coming out of KU, Colter played his second and final NFL season in KC. He played in one game for the Chiefs, registering no significant stats.

Thomas Gafford is currently #43, which is why you have to vote on the 2008 version of Thomas Gafford in this poll. He played in 9 games for the Chiefs in 2008.

Gamble was a minor kick returner for the Chiefs over three seasons. Despite me describing him like that, he does have some very interesting stats for a guy who played in only 19 games for the Chiefs:

He has one interception in his career and one rushing TD.

How many other players can claim that stat? (Okay, I just looked it up. It's in the hundreds)

Hadnot was drafted out of Texas Tech by the Chiefs in the third round of the 1980 NFL draft. He had a pretty solid few years in KC. He started 23 of the 43 games he played in at fullback or running back, had five rushing touchdowns and over 1,000 rushing yards.

Another KU grad, Jones had twelve rushing attempts for the Chiefs in 1985 before playing his final (and only his second) NFL season with Dallas in 1987.

Lane was a third round draft pick by the Chiefs out of Ohio St. He was the team's main return guy during the '85 season. He bounced around the USFL and the CFL before and after his time in Kansas City. He never returned a kick for a touchdown and averaged 8.9 and 20.7 yards per punt and kick return, respectively. 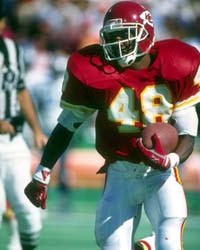 McNair was an 8th round pick in 1989 by the Chiefs. He played five seasons in KC as a fullback, special teams player/kick returner and running back. He racked up nearly 2,000 receiving yards and six touchdowns in his 90 games as a Chief. He retired as the Chiefs' #10 all-time wide receiver

McNair is currently the running backs and special teams coach for the USC Trojans. A couple of years ago, it was revealed that McNair was twice arrested in the mid-1990s for charges that looked suspiciously related to dog fighting.

Perry spent seven season in Miami before capping his career off in Kansas City. He registered no significant stats during his six games played.

An 11th round pick out of football power house Portland State, Ted Popson played three seasons in San Francisco before spending two in KC. He had a solid first season for the Chiefs - 12 starts, 35 catches and two touchdowns. He only started one game in 1998 before his career ended.

Stowers was drafted in the 11th round of the '92 draft by the Chargers. He played two seasons there and only one game for the Chiefs. He registered no significant stats.

How many KU grads are on this list? Taylor was selected in the 6th round by the Chiefs and he played in 14 games as a backup cornerback during his rookie (and only) NFL season.

Washington ended a solid 8-year NFL career with two seasons in KC. As a Chief, he started 30 of 31 games and snagged three picks in each of his two seasons. 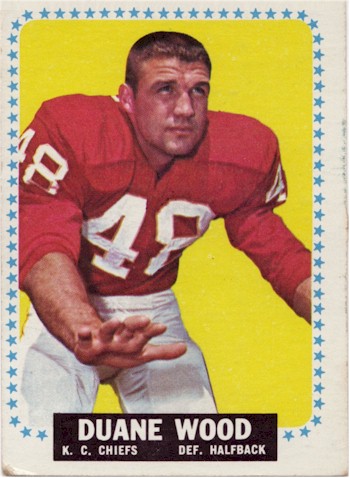 Wood played in 65 games over five seasons for the Texans and Chiefs. He made the Pro Bowl (AFL All-Start game actually) in 1963. He had 20 picks over those five seasons and probably deserves a hard look as the greatest Chief to wear #48.

Who is the greatest Chief to wear #48?