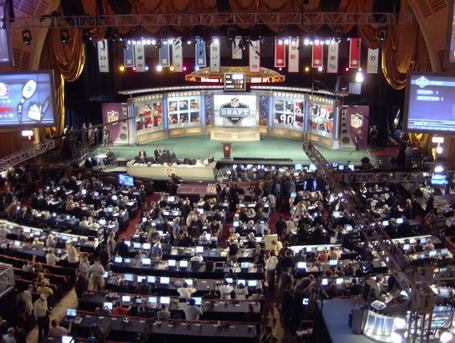 Yeah, we still have a ways to go before this happens.

Here's your Kansas City Chiefs news from across the internet. By the way, if you haven't gotten your lady friend a gift. or made that reservation for tomorrow night, now is the time to panic. Today we have contract talk and BBQ (oh, and zubaz). Still the offseason.

Am I concerned about 2010 and not signing the top free agents?

It’d be nice to get at least one, but not so much, because Weis and Crennel have been here before. Pioli knows how to work the deal and find the steal, and the New England way has won a lot of games. I’m longing for excellence in Kansas City, but I’d like it to be of the dynasty sort, which means it will have to be done the right way.

The Chiefs may not have the players yet, or they could very well have some gems right now, but Kansas City has the coaching staff to adapt to any difficulty the NFL may throw at them. That’s how confident I am in the new leadership.

Let the owners and players figure out the particulars, but have faith Pioli and crew will do their best to give Kansas City great football in 2010 and beyond.

Collective bargaining agreement or not, I feel better days are ahead! And no, I’m not wearing a Kool-Aid grin!

Chiefs set up well for NFL labor negotiations from The Examiner

Because of the expected change in the collective bargaining agreement, the Chiefs and all NFL teams will be able to designate both a franchise player and a transition player this year.

Only Chambers, Vrabel and Brown were full-time starters last season and Brown is clearly near if not at the end of his career. That leaves Chambers and Vrabel and while both were productive players and ones the Chiefs should make an effort to retain, neither makes sense at the franchise or transition numbers.

No Chiefs deserve franchise or transition tag from The Red Zone

As it is, it appears to be only a "gentleman’s agreement" for Kansas City to make the $2 million payment. Multiple sources say there’s no legal, binding requirement that the city help subsidize the Truman Sports Complex on an annual basis.

If you look at the lease agreement from the Kansas City Chiefs closely, it says that Missouri is supposed to pay $3 million a year, Kansas City $2 million and Jackson County an additional $3.5 million.

If you look even more closely (go to page 21), the lease then says there must be "a minimum annual amount of these three combined sources not to be less than $8.5 million per year."

And if you’re really scouring the document, you discover that the only signatories, other than the sports teams, are Jackson County and the Jackson County Sports Complex Authority.

There he was -- our very own Roman Harper. Man, he was prancing across the big screen, making tackles and encouraging his teammates, and playing a big role as the New Orleans Saints won the Super Bowl in their first attempt after 43 years of frustration.

Hey Number 41 made the first three tackles for the Saints. Yes, he's our own Roman Harper, son of Ronald and Princess Harper. He wears Number 41 because that was his dad's number with the Kansas City Chiefs.

Now he will have a Super Bowl Championship Ring, the only player from Prattville High School to play for a team in the Super Bowl -- and even better, they won it. That's pretty neat.

Commentary: Harper, Saints make it a Super Bowl unlike any other from The Prattville Progress

almighty31 had a great time. lost my phone then it died, but i got it back

Adam_Schefter Filed to ESPN: LB Joey Porter is back on Miami's roster. Team is not allowed to release him yet. He'll be a Dolphin till at least March.

kb_kcstar I ordered a burnt end sandwich and got ribs. She ordered pork and got turkey. Also, no beer at the back bar.

JoshLooney @kb_kcstar @chris_hamblin it's time for you 2 to knock out the double header and get down to LC's...oh, wait. hurts my soul.

TonyMarin: @trustthedust I love my Chiefs @zubaz and I would proudly wear them to any casino. Vegas or KC