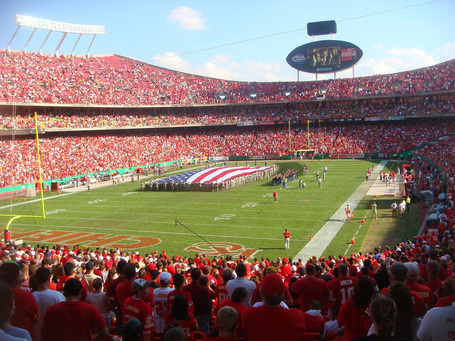 TGIF! Good morning AP. Here is your Kansas City Chiefs news from across the internet. Short post today. It must be the offseason. We start with some highlights from the Chiefs Fan Forum, where Pioli answered some questions.

Q: Can you talk about G Brian Waters winning the Walter Payton Man of the Year Award and what it means to this franchise?

SCOTT PIOLI: "Personally, I was very happy for Brian and I think the entire organization is happy for Brian. Obviously, his commitment to the Chiefs and the Chiefs community is something that we all feel very strongly about. Brian did a great job and he has represented himself in such a way as others in the past have done that. As you mentioned, the Chiefs themselves, we have a great tradition in terms of how we represent ourselves in the community, and Brian certainly received the ultimate acknowledgement this season. We are all very happy for him and proud of him."

Back in the 1990s, Hunt began a process where ownership of the Chiefs was passed on to his four children. When the transactions were completed over several years, Lamar Jr., Sharron, Clark and Daniel each had 24.5 percent of the team. Lamar had one percent and Norma Hunt held one percent.

With Lamar’s passing in December 2006, his one percent went to Norma and nothing else was affected with the ownership of the team. While things were certainly not stable on the field, locker room or coaching suite, it would have been even worse if there was instability in ownership at the same time.

Why isn’t Charlie Weis back in New England? Brady loves this guy. Yet he chooses to go to the Chiefs, who had four wins last year and have combined for just 10 victories in the last three years combined, instead of going back to a perennial contender and working with one of the great quarterbacks of all time? He chose Cassel over Brady? Really?

There are only a few plausible reasons I can come up with – and none reflect well on the Patriots. Is it money? Is it the fact Charlie didn’t want to work with Belichick again? Is it the fact that Scott Pioli out-worked Belichick and got to him (and Romeo Crennel) first? Pick one. None are good.

He's back to being pre-historic Peyton from CSNNE.com

I've long campaigned that playing the Super Bowl only in domed or warm weather climates detracts from the character of the greatest show on earth.

Think of some of the more iconic moments in the NFL over the years, and some of the greatest images come from games where the elements have come into play...

...The most obvious example would be Kansas City, who were forced to withdraw their bid to host the Super Bowl in 2015 because Arrowhead does not have a roof, and Jackson County narrowly denied the Chiefs funding to build one in time. The temperature in Missouri at this time of year is not particularly helpful to the cause, but should that prohibit a team from hosting the game? In my view, no.

JarradPage44 Everyone pray for @DEVILWANTMYSOUL. He looks like a black Buzz Lightyear and he's sick. Help him out ppl. He's got a bad case of hating lol

kb_kcstar OK Joe's is perfect mix of food, loc and experience. Joe's and Bryant's made this Carolina boy a BBQ fan. Never cared 4 it b4 moving to KC.

kb_kcstar I'll give Gates another shot someday. Till then, I'm the grand marshall of the OK Joe's parade. @joshmhawkins @hotzpur @BDub610Sports

ChiefsPR Let's settle this thing @kb_kcstar and @joshlooney. When the network TV crews come to KC, only one BBQ will do - LC's burnt ends.

kb_kcstar I love that I have lost like five followers since this BBQ discussion began. That's passion.

MoveTheSticks Marcus Allen scored 11 rushing TDs his last yr in the league, Emmitt scored 9... I think LT will still be an asset in Goalline situations

ZeeCollins: @briskeezy --CLEARLY but hey it took the Saints 44yrs lol it was there first time! So the Chiefs may have a SLIGHT chance haha