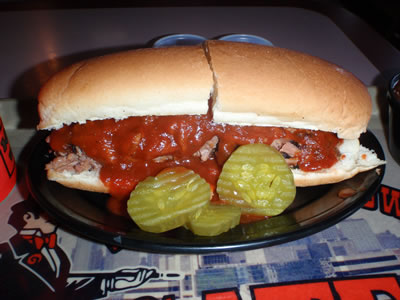 The debate in Kansas City has raged on for years: Who has the best barbecue?

I'm in the Oklahoma Joe's camp finding any excuse I can to make it down to the gas station (If you've been there, you know what I mean) and getting a Z-Man sandwich.  Mmm...my mouth is literally watering as I type this. How great is it that a sandwich includes an onion ring on the top?

On other side of the fence, is someone like my mother (who is much shorter and thinner than I) that prefers Gates Barbecue, and specifically the burnt ends sandwich. She doesn't eat much barbecue -- apparently it's bad for you but I don't buy it -- but loves the burnt end sandwich.

Well, Mother, the Chiefs GM is on your side.

While "homeless" in a downtown hotel last year right after he and Todd Haley were hired, Scott Pioli said he discovered the burnt end sandwich.

"So one night," Pioli said last night on the fan forum, "one of the guys went to Gates Barbecue and brought back this thing called a burnt ends sandwich. I’ll tell you what, it was a special one. The first one was special, the second one pretty special. I actually caught Todd one night; he had literally gone through two and a half burnt ends sandwiches himself. He tried lying to me, saying that one of the other guys had eaten it."

Just wait, Mr. Pioli. Someday someone will run out and get you a Z-Man and you'll convert. I'm sure of it.