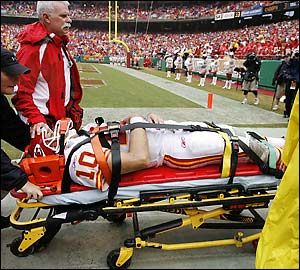 "I think it's a step in the right direction, but what I'm most concerned about are the unintended circumstances," he said. "The fact is, if you bring your son or daughter to somebody who wants to help but has no education in the area, have we really solved the problem or made it worse."

A bill is being introduced to the Missouri State Legislature that would require high school athletes who have suffered a concussion to first be cleared by a licensed health care worker who specializes in concussions.

The bill's sponsor, Don Galloway, said it would only cover high school athletes at this point but hopes it would extend to all levels of youth football.

The bill would hit home in Kansas City because of the concussion issues surrounding Trent Green. Green received a blow to the head by the Cincinnati Bengals' Robert Geathers on the first game of the 2006 season.