The Greatest Kansas City Chiefs, By the Numbers: #44

Share All sharing options for: The Greatest Kansas City Chiefs, By the Numbers: #44

We've got a wide range of Kansas City Chiefs to talk about this morning, from all-time greats to no-names to current Chiefs to players you probably you hate. Please read through all of the write ups I did for these guys. I don't want to see another travesty like with #43, where Omar Easy was voted ahead of RB Billy Jackson.

Here is the full list of Chiefs who have worn #44:

We've got the skinny on these guys, after the jump.

Anderson played two seasons in Tampa Bay before playing the bulk of his career in KC. He played in 53 games for the Chiefs, with his best season coming in 1997 when he ran back a 55-yard INT for a touchdown.

Not much out there on Harris. He played in just handful of games for the Dallas Texas, snagging a few interceptions.

Heard was a third round pick by the Chiefs out of perennial powerhouse Southern Colorado. He played all of his NFL seasons in KC, garnering 13 rushing TDs and nearly 2,700 yards rushing in his career.

Like a lot of Dallas Texans in this time period, Kelley was a local guy from the University of Texas. He played two season for the Texans.

Parker was another CFL guy who came to the Chiefs then went back to the CFL. He played in 15 games for the Chiefs in the '84 season.

Thompson was a 6th round pick by the Steelers in 1981. He had 28 rushing attempts and 9 receptions in his one season with the Chiefs.

Warfield was a 7th round draft pick out of Nebraska in 1998 and his probably best known for his three DUI arrests and 10 days spent in prison in 2005. From 2001 to 2004, he started nearly every game for the Chiefs at corner, racking up 16 INTs over those four seasons. He was signed by the Patriots in 2006 but never saw the field.

Most of you are probably familiar with Harvey Williams. He was the Chiefs' first round draft pick in 1991 and lost playing time over the next three seasons to Barry Word, Christian Okoye and Marcus Allen. The most attempts he had in a season came in his rookie year when he had 97.

Williams finished his career with Seahawks and Raiders, briefly playing at tight end at the end of his career.

Williams was a 4th round draft pick by the Steelers in 1989 and he played in six games for the Chiefs. He had half a sack in that one season. 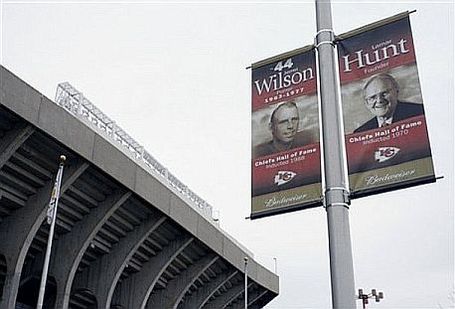 This is the guy who should get the most votes. Here is a list of Chiefs great Jerrel Wilson accomplishments:

Who is the greatest Chief to wear #44?