The Greatest Kansas City Chiefs, By the Numbers: #43

Share All sharing options for: The Greatest Kansas City Chiefs, By the Numbers: #43

I know what you're thinking after reading the title of this post...#43.....Hmmm....Who in the heck has worn #43 for the Chiefs? Well, Chiefs fans, very few players of note have worn #43. It's mostly running backs and fullbacks and none of the good ones at that.

Far and away the best player on this list is RB John Brockington, who had seven stellar seasons in Green Bay before topping off his career with a stop in KC. Is a partial season good enough to win Greatest Chief to wear #43?

Unfortunately with this group, it may be.

Current Chiefs long snapper Thomas Gafford wears #43 right now, which goes to show what a prestigious number it is.

So grab your Omar Easy jersey out the closet, hold it really close to you and click over to learn more about the greatest (well, all of the Chiefs) Chiefs to wear #43.

Bolden was a fourth round pick by the Atlanta Falcons in 1996 and he had an erratic career, both on and off the field. Before being drafted by the Falcons, Bolden played for the Winnipeg Bombers in the CFL. After his short stint with the Falcons, he went to the Panthers and then to the Chiefs. After that, it was back to the CFL and the Bombers. One season there and it was back to Atlanta. Then Jacksonville. Then Tampa Bay. Then back to the Bombers.

Wow. I'm sure Bolden's 2003 arrest for having a stolen vehicle showed us a side of him that probably kept him bouncing around the league for so many different teams.

For the Chiefs, Bolden played in 7 games and registered no stats. 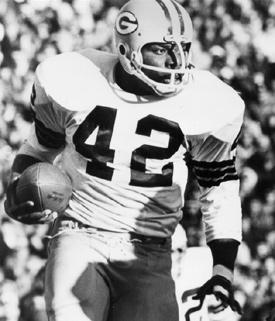 John Brockington was a pretty awesome fullback for seven season in Green Bay. He made the Pro Bowl three times and was named 1st Team All-Pro in his rookie season. He played ten games with the Chiefs in the 1977 season to end his career. As a Chief, Brockington had 161 yards rushing (1 TD) and 222 yards receiving (1TD).

Easy was a 4th round draft pick by the Chiefs in '02, coming out of Penn State. He played three seasons in KC and one season in Oakland to finish his NFL career.

Some interesting tidbits about Easy are that he has exercise-induced asthma, which has to be a tough illness to have as a football player. He also currently coaches at his former high school in Massachusetts.

Hanoian was briefly a Chief during the 2007 off season. He came to training camp but didn't make it through the final cut. He has not played in the NFL since.

Jackson made quite the splash in KC at a 7th round draft pick in 1981. Coming out of Alabama, Jackson had 10 TDs rushing and 398 yards to add on top of that. He turned in 16 rushing TDs in his career with the Chiefs. He only played four seasons in the NFL, all with the Chiefs.

From that first season, his starts went up but his stats went down. Jones' four years with the Chiefs were his only four in the NFL. 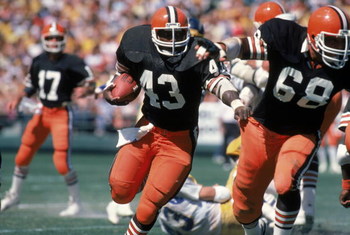 Pruitt was a long time Cleveland Brown, even making the Pro Bowl a couple of times during his time there. In two seasons with the Chiefs, toward the end of his career, he played in 24 games; rushed for 814 yards and four TDs; and caught 15 passes.

Pruitt actually had two different stints with the Chiefs over the 85-86 seasons, with a brief stopover in Buffalo.

Thomas was a first round pick by the Cowboys in the 1972 draft but quickly fell from grace. He returned 25 kicks for the Chiefs in his one of three NFL seasons.

Williams played for Oakland, Jacksonville and then back to Oakland before landing in KC. He played in 11 games and started two at fullback. He had two catches for 11 yards for the Chiefs.

Sound off Chiefs fans. Who is the greatest Chief to wear #43?