Matt Cassel Learns Not To Drop Cliches Around Jay Glazer

Share All sharing options for: Matt Cassel Learns Not To Drop Cliches Around Jay Glazer

If you've been reading Arrowhead Pride long enough, or you've ever Googled Matt Cassel, then you've seen it. It's one of those embarrassing high school photos that everyone has.

But not everyone appears on The After Party with Jay Glazer on FOXSports.com as Cassel did last week after the Jaguars victory. Let's pick it up in the middle of the interview....

Cassel: "It's just taking it one game at at time. We know there's a lot of football left and we're only six games into the season. We're concentrating on one game at a time. and trying to move forward and bulid this lead in the West."

Glazer: "Hang on. Did you really just drop the 'one game at a time' cliche on me? Did you really? There's gotta be punishment for that. As a result of that, I'm going to show everyone your high school photo." 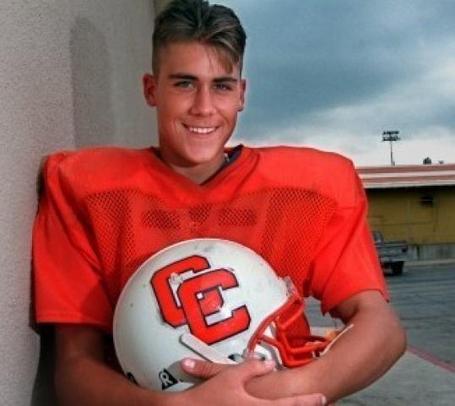 Glazer: "Straight from Saved By The Bell. Are you kidding me? Are you trying out for Twilight?"

Cassel: "That was sweet dude (laughing). I mean I cut it up. That's called a stack back in the day. High up top and short on the side. I can't believe you showed that photo."

Glazer: "If we went to high school together, I definitely would have beat the hell out of you."

I wish I had something to add but I think Jay Glazer took care of it all.

(H/T reader LHO for the heads up on the video)