Raiders head coach Tom Cable said this week he hopes the Coliseum can be the same type of advantage Arrowhead Stadium brings in Kansas City. He talked on Wednesday as if he expected an increase in attendance. "It's just exciting to know come Sunday we're going to have our partner in this thing, and that's the community and the fans there with us," Cable said.

I clicked on the Raiders official site and was greeted with this effective marketing tool: 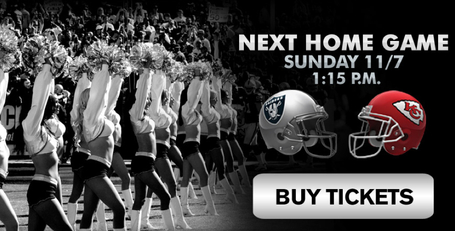 Cheerleaders. (But where do I buy tickets?)

Now Steve Corkran of the Mercury News writes, "Indications are tickets for the Chiefs-Raiders game are going fast with the help of a 2-for-1 promotion." That could mean the end of the Raiders 11-game home blackout streak. Last week they got 35,000 in attendance. The last sellout -- Sept. 24, 2009 on MNF -- came with 61,000 in attendance.

So not so fast on the Chiefs vs. Raiders game being blacked out in Oakland. Maybe the rivalry is back and Raider fans have some fight left in them after all.